While serving a prison sentence, it seems that the worst has already happened. But life is preparing new trials for many political prisoners. Those who violate the regime in the colony are sent to the Mogilev investigative prison No. 4 in more stringent conditions. People are forced to stay in the cells all the time and can leave them for only an hour, during a walk. We continue to talk about conditions in places of detention, and today, we will pay attention to investigative prison No. 4 in Mogilev. 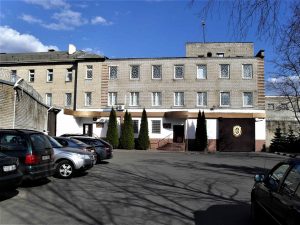 The history of the investigative prison started in 1979 when the pre-trial detention centre started working in the building. The isolation ward is located here now. It is adjacent to the investigative jail and is designed for 1,000 people. Up to 200 people can be in prison at the same time. These premises have never been repaired for more than 40 years. There have never been measurements of natural lighting, and the administration avoids compliance with Sanitary norms, rules, hygienic standards approved by the Ministry of Health.

Metal strips 5-6 centimetres wide are still welded to the windows of the investigative prison. They are located on the outside of the window at an angle of 45 degrees. They have been repeatedly proposed to replace them with ordinary bars so that prisoners could look out the window or read in daylight. After all, due to poor lighting and the round-the-clock operation of artificial light, their eyesight deteriorates, their head begins to ache. But the Department of Finance and Rear of the Ministry of Internal Affairs said: it is impossible to measure the indicator of natural illumination in the compartments.

The prison has penal isolation cells located in a basement. There are no windows, no ventilation, and it is constantly damp and cold. Especially malicious regime violators are put here, and they do not see the sun and sky. And a stall with the most necessary things is also equipped for prisoners of the prison, but shopping here can only be done on certain days.

After the 2010 elections, ex-presidential candidate Mikalai Statkevich ended up in Mogilev prison. He was sentenced to six years in prison and served his sentence in the Shklov colony, but there, he was made a «malicious violator» and transferred to jail. Later, the political prisoner recalled he had seen the sun in the prison courtyard only in summer. 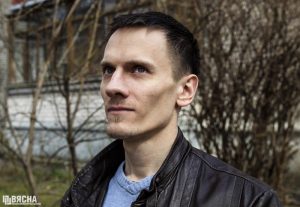 Mikalai Dziadok was serving his sentence in a covered prison. He stayed here from 2012 to 2015. Even then, those who were objectionable in the colonies — rebels, political prisoners — got into the Mogilev prison. Whereas before, the prison was for the authorities of the criminal world. Mikalai Dziadok recalled that they were sent to jail only at night: they woke up at two or three a.m., forced to pack up, but the person leaves only in the morning. The journey of 36 kilometres from Shklov correctional facility No. 17 to Mogilev for Mikalai Dziadok lasted 12 hours. In the morning, people in masks and special forces uniforms flew into the cell of the political prisoner, shouting: «With things on the way out», and then forced him to strip naked and searched. It is done to intimidate — especially for those who are in prison for the first time

Mikalai Dziadok recalled that the distribution of cells in remand prison No. 4 is not standard. If a person cooperates with the administration or beats other convicts, he is beaten up and sent to the cell. The prison staff brought each newcomer to a conversation with a criminal authority themselves — this is illegal. A seasoned prisoner determined the character and habits of a new one by a single conversation. Those who signed a paper on good behaviour will not be respected in prison. Prisoners cannot move from cell to cell, but it was possible in Mogilev prison. The staff listened to criminal authorities. 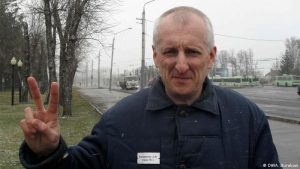 On March 31, 2017, human rights activist Andrei Bondarenko was released from the Mogilev investigative prison. He was imprisoned for three years, having been jailed in 2014 on charges of hooliganism. But the human rights defender can safely be called a political prisoner. He told the UN Human Rights Committee about human rights violations, torture and the murder of people in prison. They were collected by the human rights organization «Platform», which he headed. Andrei Bondarenko found himself in Mogilev prison already at the end of his term for violations of the regime in the colony. ​​In prison, he was accused of disobeying the administration — the prisoner lay down on the bunk during the day, said something to another convict while returning from a walk, and then did not immediately make a report when the controller appeared in the cell. He was tried in this case. During the session in the Mogilev court, filming was banned. But few photos captured the emaciated and emaciated man. Two days before his release, Andrei could get two more years in prison. But this did not happen, and the human rights defender was acquitted. Before leaving the prison, Andrei Bondarenko was allowed to make a call from prison, in which he announced that he was released.

After the 2020 elections, those political prisoners who disobeyed the administration in their colonies or violated the regime are sent to investigative prison No. 4. Now there are 34 political prisoners there, of which three are women. Prisoners are kept in both general and strict regime conditions. People transferred to the non-strict regime have the right to purchase food and necessities in 64 rubles per month, for two short-term visits per year, one parcel or two small packages per year and a daily walk of up to 1.5 hours. If a convicted person is transferred to a strict prison regime, he has the right to buy food and necessities in the amount of 32 rubles per month, for one short-term appointment per year, one small parcel or one small package per year and an hour of daily walking. Prisoners can work on the prison grounds — there is a sewing production here.

A prisoner who visited the Mogilev investigative prison after the 2020 elections said: «You are greeted by «masks» — employees in balaclavas. They turn to you with abuse, they intimidate harshly and lift into the cell. The prison is divided into tiers, which for some reason are called «regimes» — the first, second, third «regime». The higher the «mode», the easier the conditions. In the first mode, there are «stables» for 18-20 people, «bunks» are welded from unknown materials, everything is crooked. On the third floor, the cameras have been repaired». 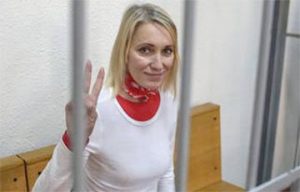 Swiss citizen Natalia Hershe refused to sew a uniform for the Belarusian security forces, and she was transferred to the Mogilev prison. From 6 am to 10 pm, the radio in the cell was playing too loudly and turned off only for the night. Natalia took 16 hours of propaganda a day as torture, and on January 30, 2022, she went on a hunger strike. Soon Natalia sent her brother Gennady Kasyan a telegram: «The hunger strike has been lifted, the conflict has been settled». Natalia got detained in September 2020 during the women’s march. She was tried for ripping off a balaclava from a riot police officer and sentenced to two and a half years in a penal colony. 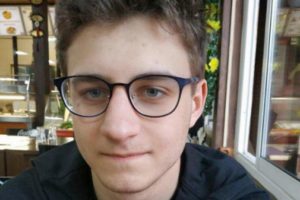 On June 9, 2021, Nikita Yemelyanov, imprisoned in 2019, was transferred to the Mogilev prison. He was sentenced to four years in prison for intentional destruction or damage to property committed in a generally dangerous manner or causing major damage (Article 218 of the Criminal Code), desecration of structures and damage to property (Article 341 of the Criminal Code) and illegal actions against firearms, ammunition and explosives (Article 295 of the Criminal Code). The prison administration imposed penalties on the prisoner and punished him for days in the punishment cell. In the fall of 2021, Nikita spent a whole month here and held a 20-day hunger strike. From November to December 2021, he served 38 days in the punishment cell. The guy was deprived of a short-term visit with his family – the only one in a year. He almost does not receive letters from relatives and friends, and the administration seizes even the drawings of his younger brother. He is being held in solitary confinement. On January 27, 2022, a trial began against Nikita under Article 411 of the Criminal Code (malicious disobedience to the administration requirements of a correctional institution). 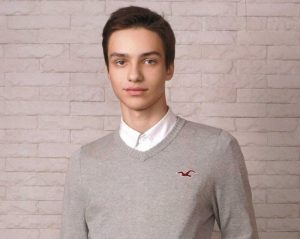 In December 2021, Artem Boyarsky, a former student of the chemical faculty of BSU, was sent to the investigative prison in Mogilev. He was detained on March 24, 2021 – security forces broke into the hostel where he lived, as a white-red-white flag was allegedly hanging on the 11th floor of the building. The next day, propagandist Grigory Azarenok posted a video with Artem’s confession in the administration of Telegram channels. Artyom told his lawyer that he did it after being beaten on the buttocks and back with a baton. On April 26, 2021, the guy was charged under Article 361-1 (creation of an extremist formation or participation in it). In December 2021, Artyom was also tried under part 1 of Article 342 of the Criminal Code (participation in actions grossly violating public order). He was sentenced to five years in prison. At the end of December 2021, the parents met with the political prisoner in the pre-trial detention centre and told him that his cough had not stopped for the fourth month, and an unknown allergy went on his skin. But, despite this, the guy keeps up cheerfully. On December 30, 2021, Artyom was transferred to investigative prison No. 4. Here he is not allowed to observe the bed rest prescribed by the doctor. 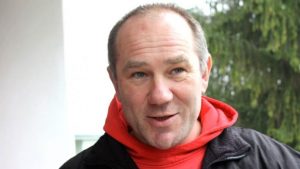 Opposition blogger Alexander Kabanov has been in the same prison since December 2021. At the end of October 2021, it became known that Alexander was punished with six months of the punishment cell for «systematic violations of the rules of detention». The blogger could not receive parcels, have calls and visits with relatives during this period. On December 14, 2021, Alexander was changed to a strict prison regime and transferred to Mogilev prison on December 21, 2021. Alexander is in custody on charges under part 1 of Article 342 of the Criminal Code for a picket in Grodno on May 29, 2020. He was also found guilty of insulting the judge of the Brest Regional Court, Andrei Leshchenko.

Prisoners in Prison No. 4 live in conditions of complete lack of freedom. Human rights are not respected here. Prisoners cannot even attend ideological lectures and second-rate TV series like their colleagues in the colony. They do not have the opportunity to see their relatives, call them, receive parcels and letters. They are completely closed off from the world, and free space and sunlight are stolen. Thus, the illegitimate regime punishes those who have annoyed him the most — those convicted of attacking security forces, insulting government officials or insulting Lukashenka. But we know for sure that the political prisoners will not give up and continue their struggle.