Military service is not only training ranges, exercises and target shooting, but also hard physical labour. Soldiers clean barracks and bathrooms and go to help agricultural enterprises with harvesting. This week we devoted to slave labour, and we will tell you how the illegitimate state exploits soldiers. 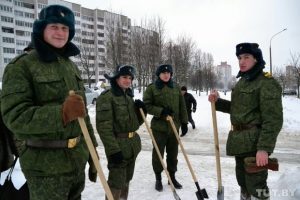 In January 2016, more than 600 servicemen were involved in snow removal in Minsk, Brest, Vitebsk, Borisov, Zhodino, Krupki, Logoisk, Negoreloye and Kolosovo settlements, Novolosovo settlement, Zaslonovo and Pechi military camps. Cadets from the Military Academy and military faculties of civilian universities and conscripts took to the streets of the towns to fight the snow. Special machinery cleared the snow on the highway Slutsk – Starye Dorohi, M-1 (direction Barysau – Minsk), the road to the agro-town Iserno. The Ministry of Defence did not inform about the work schedule and remuneration.

In March 2018, some 750 internal troops helped utility workers in the country with snow removal. In two shifts (8 a.m. to 12 noon, 3 p.m. to 7 p.m.) every day, soldiers helped shovel snow off streets and yards. At the same time, there was no mention of how much money the soldiers got.

In 2021, more than 250 employees of public utilities, about 450 citizens of Minsk and military cadets together cleaned the snow in Leninski district, the agency “Minsk-news” reports. “Due to heavy snowfall, authorities have asked for help from military units, military faculties of universities and residents to clear the snow. People are eagerly responding. There are 25 pieces of equipment at work. Each janitor is given spare shovels and scrapers, and notices are posted about where you can borrow the equipment. Townspeople react well, help, take an active part”, Oxana Andrukhovich, deputy director of Leninskiy district housing and communal services, noted. “The biggest difficulties arise because many cars are in the yards. The workers of housing and public utilities use manoeuvrable mini loaders instead of large-sized vehicles in the yards, where the aisles are too narrow, and there are cars, “snowdrifts”, which are not moved out all winter”.

In Brest in 2021, emergency workers, power engineers, other services and enlisted soldiers were engaged to deal with the consequences of the snowstorm. They removed fallen trees, worked to repair broken wires and cleaned snow-covered streets. The soldiers of the Brest garrison worked on the territories of health care institutions, in particular, Brest City Hospital No 2. 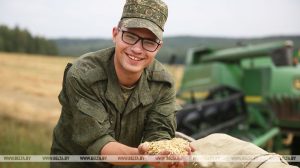 In 2017, the Council of Ministers of Belarus issued an instruction that obliged the Armed Forces to assist agricultural organisations with crop harvesting. From July 25, conscript soldiers started working in 14 agricultural organisations in Minsk, Starye Darohi, Mstislavl and Osipovichy districts. The Ministry of Defence has formed combined vehicle platoons of the 30th Separate Railway Brigade of the Department of Transport Support of the Ministry of Defence and the 15th Anti-Aircraft Missile Brigade of the Air Force and Air Defence Troops from military servicemen and civilian personnel of formations and military units. More than 80 soldiers are involved in the clean-up.

In 2018, the website of the Vitebsk Oblast Executive Committee described the involvement of soldiers under the “guise” of gratuitous aid in the harvesting campaign in Senno district. A combined platoon of 45 soldiers arrived there to transport grain, rapeseed and straw from six in the morning until late in the evening. It was considered a field trip, so the soldiers didn’t get money. They were, however, provided with three meals a day and lived in “proper living conditions”. They spent two months in the field, after which they were escorted back to their place of permanent deployment with a loaf, a festive meal and a concert. The soldiers were given packed rations for the journey. Vasiliy Cherednik, chairman of the Senno District Executive Committee, stressed that they had demonstrated that “our army is strong, not only in ensuring the country’s defence potential”.

It is not a single case involving soldiers in the clean-up. In addition to Senno district, the work of conscripts was used in Minsk and Mstislavlau districts, where 114 soldiers and 70 vehicles worked in the fields without pay. For example, in Minsk district, the help of conscripts was used by the poultry farm “Belaruski” and agricultural enterprise “Zhdanovichi”. Here young men on military trucks gathered and transported threshed crops to granaries, helped with the transportation of bales of straw. In return, they got a delicious lunch and an experience of the modernised ancient Belarusian tradition of grain harvesting.

Soldiers on the clean-up days 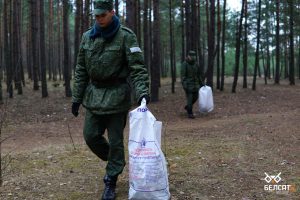 It is not the first time the state has used free labour to clean up territories and improve cemeteries, parks and beaches. On April 20, 2019, during the nationwide subbotnik, military teams cleaned up memorials, monuments and worked on the graves of soldiers and partisans of the Great Patriotic War and in places of military and military glory. Conscripts worked on the improvement of territories and parks of military units. In addition, soldiers of the 51st Guards Artillery Brigade approached all the personnel of the Armed Forces with a proposal to collect a sum of money equal to one day’s wages (money allowance).

On April 17, 2021, during the republican subbotnik in Baranovichi, the personnel of the military unit 54804 were armed with brooms and rakes. The soldiers cleaned up the rubbish behind each territory assigned to their units. The conscripts cleaned up individual warrior graves, tidied up the territory in the garden named after Vladimir Karvat and near the pedestal of MiG-29, and helped clean up the Molodoi Park.

This year, the soldiers also worked on the Saturday clean-up day, which took place on April 16. For example, soldiers of the military unit 72471, located in the military town Pashkovo, Mogilev district, took part in the national subbotnik. They cleaned up the military camp and the territory around it and did the cleaning around the monument to those killed during the war. Officers of the Chief Military Inspectorate joined the servicemen of the brigade.

In the series of articles about slave labour, we talked about the dangers of outsiders being involved in agricultural work. There is an example of a harvesting accident – Victoria Popchenya, a 13-year-old schoolgirl, was killed by a truck while she was harvesting potatoes. The same thing can happen to any conscripted soldier. And conscripts understand this, which is why they do not want to join the army. As part of the “No means no” campaign, we support soldiers who do not want to be the cannon fodder and cheap workers.