About 20 underage girls convicted under Article 328 of the Criminal Code are serving their sentences in Homel penal colony № 4. 17 girls were detained or convicted under this article in 2021. Since the beginning of 2022, the number of girls-328 has increased by seven teenagers. There is almost no information about these girls in the public domain – and it is as if they do not exist for society either. But this does not make the girls’ stories any less tragic.

Girls-328 are Belarusians aged 14 to 18, detained and convicted juveniles. Each of them has a different story. Very often, these girls come from broken families, or they are social orphans who do not have such resources as their peers. Many schoolgirls go into the drug business to help their families financially. However, the state still does not see it as their fault.

Nastya, 16, lived in a regional centre in Belarus and was a college student. She found an advertisement for earning money on social media, went to pick up a tab, and was apprehended. It surprised everyone she knew – the girl had always been quiet, calm, not an excellent student, but not bad at school. Her mother died a few years ago, and she lived with her grandmother. The “bosses” from the online shop paid Nastya’s way to the capital and accommodation in a rented flat. The girl told investigators that she spent the money on clothes and holidays. The college administration said they would do everything possible to ensure that the underage girl gets the maximum term (up to 15 years in prison).

Vika is serving her sentence in colony No. 4 in Gomel. Several years ago, she decided to earn money by distributing drugs, as she wanted to help her mother, who was bringing up her daughter alone. Vika said that her mother could buy her anything she wanted, but she understood that every such purchase was difficult for her. Then the girl decided to earn her own money and borrowed the contacts of an online shop from a friend. She gave the money she made from her dangerous business to her mother and kept a little for herself.

In February this year, two underage girls, students of a secondary specific education institution, were detained in Slonim. The girls were social orphans – their parents were deprived of parental rights. Of course, the girls did not have a lot of money. The desire to look as good as their friends from well-to-do families and have a good time was understandable. Therefore, the girls decided to earn money in the online shop and became drug distribution couriers. Now they face up to 15 years in jail.

In March of this year, a 16-year-old girl from Ostrino village, Shchuchyn district, was detained in Hrodna. She studied at a college in the regional centre, with a positive reputation and lived with her mother. She got into the drug business to help her mother financially and make “easy money”.

Underage girls often fall under the influence of their more authoritative friends or young people. Some are led to prison by love – a guy, often a few years older than them, is playing tricks on his young girlfriend, telling her tales of the beautiful life that awaits them, while the girl, like in soap operas, goes on a crime spree for the sake of her lover.

State publications tell the story of Katya, detained as an underage girl. She was dating a boy who was a drug dealer. Katya was inspired by the beautiful life and the opportunity to buy a phone and expensive new clothes. The girl was from a well-to-do family, she did not need anything, but because of her boyfriend, she ended up in the drug business. Now she is serving a long sentence in a penal colony in Homiel.

On March 17, a 17-year-old girl was tried under part 4 of article 328 of the Criminal Code in Zhabinka. The girl was in the 11th grade in a school in Zhabinka and went out with a 22-year-old man from Minsk. The guy worked nowhere, planted drugs and got his under-aged girlfriend hooked on drugs. Eventually, she too became a courier for an online shop. The boyfriend and the girl hid at least 450 doses of the drug in caches. During a personal search of the couple, they seized rolls of mephedrone and mobile phones with the coordinates of the hiding places and pictures of the young people using drugs. The girl was sentenced to 10 years imprisonment to be served in an educational colony. She will also receive compulsory treatment for drug addiction. Her boyfriend will spend 12 years in prison.

In what conditions are girls-328 serving their sentences?

The Belarusian juveniles are kept in the same colony as the adult female prisoners. It is penal colony No. 4 in Gomel. The dormitories for girls under 18 are smaller than for adults. There are the same beds in two tiers, two chairs by each bed, bedside tables with flowers, and a carpet on the floor. On each bedside table, there is a picture of the prisoner, information on her article and punishment. 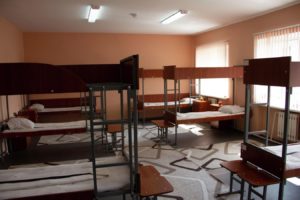 A branch of Gomel Secondary School No. 34 operates here for juvenile convicts. Schoolgirls take the same school subjects as their peers on the outside, they also have textbooks and school uniforms. In addition, several schools and centres (the centre “Confidence”, “School of Social Adaptation”, group “Happiness of Motherhood”, “School of Happy Family”, “Women Club”) work in the penitentiary. According to the state agency BELTA, some convicted girls are distance-learning and are studying to become teachers and psychologists. The inmates are required to attend prevention programs to promote healthy lifestyles. Inmates are also allowed long and short visits, four regular phone calls and two video calls per month to their parents.

The girls in the colony, like their adult neighbours, work. They weave loofahs. As one of the ex-prisoners from the juvenile detention facility recounted, they got $10 a month, and if they didn’t meet the plan, they were fined. It was impossible to fulfil the plan: lectures, sometimes sports, sometimes talks. The girls had to go to all the events, participate in cultural activities because this was taken into account when the punishment was reviewed. And all inmates want to go home.

Girls-328 do not go outside the colony even when accompanied by an educator. They spend 8, 10 and even more years in the confined space. At the same time, officials often visit girls-328. Thus, in August 2021, the Chairperson of the Council of the Republic of the National Assembly, Natalia Kochanova, came to colony No. 4 and also visited the site for minors. Natalia Kochanova talked to girls-328, who ended up in the colony as minors. In September 2021, the convicted girls were visited by their peers from the outside – pupils of secondary school №29 in Gomel. The excursion to the colony took place under the auspices of “drug addiction prevention”.

The under-aged girls, convicted under Article 328 of the Criminal Code, will spend years in prison, which could have been spent getting an education, finding a job, starting a family, and having children. They will leave the colony in their 30s – and find themselves out of the picture. Their psyche will be ruthlessly crippled by interrogations, torture, rights violations, being side by side with murderers and thieves in pre-trial detention centres, show trials. In the colony, this is exacerbated by constant psychological pressure, the need to fulfil the norm in order not to be fined – and this lasts not for two years, not for four, but many times longer. After leaving the colony, convicts will face social stigmatization because society does not understand how a person got into prison. Many people think: if she has been in jail for drugs, it means she is using, she is infected with HIV or involved in prostitution. Few people take decent jobs for ex-prisoners. They have little chance of building a family, as boyfriends and their families may be deterred by a woman’s prison record. As a result, girls-328 risk being lonely, not finding themselves, and then either going back to prison or committing suicide.

And this could have been avoided. If the illegitimate state had paid decent allowances to orphans, helped them find employment and housing (not in word but deed), girls without parents would not be looking for easy earnings. If small towns had decent salaries and business assistance, girls from there would not seek to help their parents. If the police shut down online shops selling drugs instead of arresting teenagers to earn new titles, bonuses and commendations, the girls would not fall into criminal networks. But for now, the support of the security forces and officials is the priority, which means they will continue to ruin girls’ lives, depriving them of education, family, love and freedom.