After the elections 2020, Lukashenka allowed the security forces to do literally everything: to break into flats, to beat people in the streets, to carry weapons, to shoot people. Impunity has untied their hands, because no law enforcement officer will be punished for any crime against an ordinary citizen. Not even for an attack on a child’s life. On June 21, 2022 in Minsk an employee of “GUBOPiK” (General Directorate for Combating Organised Crime and Corruption) Andrey Parshin shot and wounded a 16-year-old boy – but the criminal case was opened against the child. 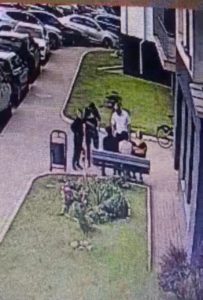 On June 21 at about 7 p.m., a group of children, the youngest being 11 years old, gathered near one of the entrances to the Cascade housing estate. Andrei Parshin, a head of the Department of Operative-Investigative Activities of the Main Directorate for Combating Organised Crime, was walking by and did not like the fact that the children were sitting near his doorway. He attempted to disperse the children, but a 16-year-old boy fought him off. According to eyewitnesses, Andrey Parshin asked the boys if it was their entrance and ordered them to leave using foul language. To which 16-year-old Evgeny said that “they live in a free country and are free to choose the bench”. In response, Andrey Parshin started beating the teenager. According to witnesses, the enforcer grabbed the boy’s shirt, ripped it in one movement and hit the teenager in the face. Yevgeny is engaged in sports, he is a candidate for the master of sports in rowing, so he pushed his opponent to the ground. And when Andrey Parshin got up he took out his gun and started shooting at the children.

Having fired several shots, Parshin took the gun home and called an ambulance and the police. The children were questioned by law enforcement officials who told them that if they told the truth, they would all go to jail. After that, the children were taken away in other cars, eyewitnesses recall. Yevgeny, 16, was taken to hospital – he has a gunshot wound on his leg. He ended up under escort in a military hospital. A criminal case was opened against him for hooliganism (Article 339 of the Criminal Code). Yevgeny’s 14-year-old girlfriend also spent the night in police custody. Yevgeniy’s home was searched.

Lukashenka’s propaganda have a slightly different view of the story. According to “Minskaya Pravda” newspaper, the adolescents themselves were to blame for the conflict: they swore, behaved in a defiant manner and reacted aggressively to requests to calm down. Andrei Parshyn demanded from them not to use foul language and to behave calmly, to which he heard a stream of foul language. He introduced himself and explained that he was a police officer, but this only encouraged the youths and they started hitting the law enforcement officer on the head. Then he had to pull out his gun. The propagandists “got” Yevgeny’s relatives as well – it was written that his father had been convicted four times. And among the boy’s friends was a girl who had already been convicted of theft.

Who is Andrei Parshin? 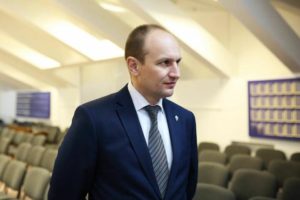 In November 2021, it was Andrei Parshin who proposed to revoke citizenship, regardless of the method of acquisition, if a person was found guilty of extremist crimes or caused serious harm to the interests of the state. The enforcer considered all oppositionists as criminals: “The social portrait of these “zmagary” (as the Lukashenka’s regime names the protesters) with their own people: unemployed, with a previous conviction, an adherent of LGBT values. In essence, an individual with an inflated sense of self-worth who has failed to fulfil himself. Radical televangelists and opposition leaders call these outcasts of society “political prisoners” and make up heart-warming stories about how “regime” has jailed the best people in the country for nothing”. About the recording of repentant videos with protesters, Parshin said, “The publication of a detained offender who ruined his and his family’s life by following commands from extremist telegram channels is the best prevention and practical manual on how not to act.”

Andrei Parshin has repeatedly appeared in the propaganda broadcasts of Lukashenka’s channels. For instance, in the film “Mould”, dedicated to the “Black Book of Belarus”, Parshin talked about “grand conspiracies and deceptions” and showed “conspirators” who were preparing a coup d’état in Belarus. By the way, the scheme raised a lot of questions and looked highly improbable. In the film “BYPOL. Mandate to Betray” he accused his former colleague, Lieutenant Colonel Stanislav Luponosov, of working for foreign intelligence.

About weapons for security forces

On March 9, 2021, Lukashenka signed a decree that allowed the armed forces, transport troops, state security, the Investigative Committee, and border guards to combine security services with profit-making activities. The decree allowed law enforcers to keep in their bank accounts money from the surrender of secondary material resources and precious metals, as well as funds received by military units from income-generating activities. This decree could be seen as Lukashenka’s gratitude for the role the military played in the events of 2020.

On May 17, 2021, Lukashenka signed the document “On amending the laws on national security of the Republic of Belarus”. The new law allowed internal affairs authorities to use weapons, physical force, combat and special equipment “when suppressing mass disorder. However, law enforcement officers are essentially not responsible for the harm caused by the use of such equipment and special means. They can search people, their belongings and vehicles, and obtain information and personal data from information systems free of charge, without the written consent of the persons concerned. The security forces are also authorized to prohibit citizens from making sound and video recordings, filming and photographing of their surroundings.

On April 27, 2022, members of the House of Representatives passed amendments to legislation according to which members of the armed forces may use weapons “against persons participating in a group or armed attack on a military outfit or a guardhouse (duty unit premises)”. It is also legal to use weapons against people who try to illegally enter the territory of protected objects or to escape after such an attempt. Combat and special equipment may be used for crowd control.

All these laws explain, why Andrey Parshin may have had a gun outside his work hours. His actions fall under paragraph 3 of Article 426 of the Criminal Code (abuse of power or official authority). But he will not be held responsible for that, because the state propaganda makes him look like a hero who saved the Cascade housing estate from rampaging teenagers.

What is known about “Cascade” 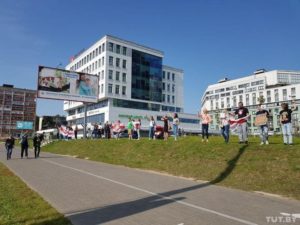 This residential complex actively protested against the dictator in 2020. From the very first days after the 2020 elections, the residents of Cascade bought fabric together in TSUM for the flag, a local seamstress sewed the flags. Minsk residents began to be arrested for this, and administrative penalties were handed down. But this did not stop it; evening tea parties and courtyard concerts were held in “Kaskada”. On 23 September 2020, a chain of solidarity lined up here. 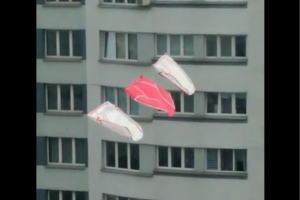 In November 2020, three pairs of underwear were hung up in an apartment complex: white, red and white. Law enforcers came to take them down – this “operation” made the whole internet laugh. Law enforcers climbed to the roof and used a large hook to try to remove the underwear hanging at the level of one of the upper floors. But the underwear was dragged through the window by locals. As a result, the law enforcers left Cascade without their underwear. The next day, the police raided the apartment complex and started breaking into flats, breaking down the doors with a crowbar and a drill.

On December 28, 2021, residents of the residential complex “Cascade”, united through a Telegram chat room and an Instagram account, were recognised as an extremist formation. “The actions of the founders, leaders of the said extremist formation, as well as its participants form the corpus delicti under Article 361-1 of the Criminal Code of Belarus (up to 7 years of imprisonment)”, emphasized the officers of the State Border Guard Committee of Belarus in their Telegram channel.

What happened to the enforcers who shot children

One of the most notorious law enforcers of the shooting rampage is Major Denis Yevsyukov. On the night of April 27, 2009, he celebrated his birthday, picked up a gun and headed for a Moscow supermarket. On the way, Yevsyukov shot a taxi driver and several passers-by, then entered the shop and opened fire on the customers. As a result of the shooting, two people died and seven others were wounded. Among them were two teenagers aged 18. The major also shot back at the arriving police squad, but was detained. Denis Yevsyukov was sentenced to life imprisonment in February 2010.

On May 31, 2019, drunken police officers from Pereiaslav-Khmelnytskyy in Ukraine, Volodymyr Petrovets and Ivan Prikhodko, staged a bottle shooting. Instead of a metal can, a bullet hit a 5-year-old boy in the head. Four days later the child died in hospital. A criminal case was launched against the police officers. After the child’s death, Dmytro Tsenov stepped down as head of the Kiev regional police. The heads of the Pereyaslav-Khmelnytskyy police department in Kiev Region were also dismissed from their duties. Volodymyr Petrovets and Ivan Prikhodko were not sentenced before the war started.

On May 30, 2021, former law enforcement officer Sergei Bolkov opened fire on passers-by from the balcony of an apartment building in Yekaterinburg. A Rosgvardia officer and a 9-year-old girl were wounded. The bullet hit the child in the stomach. The girl was hospitalised in an extremely serious condition at the children’s city hospital. The shooter was a veteran of combat operations in Chechnya, had been depressed and drinking for a long time. In February 2022, Bolkov was sentenced to 18 years in prison.

On December 7, 2021, Sergei Glazov, 45 years old, a lieutenant colonel in the Russian army reserve, began shooting at staff and visitors at the Ryazansky MFC in Moscow. Two people were killed. Among the victims was a 10-year-old girl who had come to the MFC with her family. The bullet grazed her tangentially. Eyewitnesses said Sergei Glazov was in an inadequate state, talking about a world conspiracy, a coronavirus and a pandemic. In February 2022 Sergey Glazov was declared insane.

After the election, Lukashenka said that Belarus “sometimes has no time for laws. The laws of our country protect law enforcement officers, judges, officials and all those who serve the regime. Even children become targets of the repressive system. It is difficult to say how the story of 16-year-old Yauhen will develop further – it is quite possible that the list of juvenile political prisoners will be added to it.

We use cookies on this site to enhance your user experience. By continuing to browse our website you are agreeing to how we use cookies. You can change your browser cookie settings at any time.I AGREEMore information