Political repressions against minors in Belarus 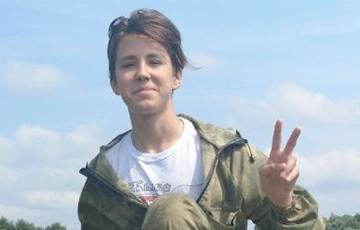 15-year-old Illarion Trusov is a Belarusian-speaking student of a Minsk gymnasium. In 2019, an event prompted the teenager to take an active civic position. In April, at the Kurapaty commemoration place, on the orders of the authorities, the people’s memorial to the victims of Stalin‘s repressions was dismantled. Illarion expressed his disagreement by taking part in peaceful protests and religious events. This attracted the attention of law enforcement agencies and social services. In total, ten administrative reports have been compiled on Illarion and his parents; he has been repeatedly summoned to a commission for juvenile affairs for conversations.

The chronicle of repression (2019)

On April 7, Illarion took part in a prayer service (interdenominational prayer for the Kurapaty) at the Cathedral in Minsk. The next day, a social educator of gymnasium No. 174, where the teenager studied, summoned him for a conversation about his participation in the prayer.

On April 10, Illarion was again summoned for a preventive conversation with a social educator. He was shown a photograph taken during the prayer. The teenager was informed that a police report under article 23.34 of the Code of Administrative Offences (violation of the rules on organizing and holding public events) was compiled. During the conversation, threats were addressed to him. On April 11 and 15, Illarion was once again summoned to a social educator.

On April 15, Illarion and his father were summoned to the Central District Department of Internal Affairs in Minsk. The father was fined 50 basic units (1275 roubles) for actions of his son under art. 23.34 of the Code of Administrative Offences.

On April 27, Illarion was detained in Logoisk while he together with activists of the Young Front was collecting signatures under a request for the return of the crosses removed from Kurapaty on April 4 and 13. The teenager was taken to the Soviet District Department of Internal Affairs in Minsk, where a police report was compiled on him under part 23 of article 23.34 (violation of the rules on organizing and holding public events). This was related to his participation in the Chernobyl Shlyakh (Chernobyl March). When his father came, Illarion was released.

On May 2, at the request of Illarion, a statement was drawn up on bringing a teacher of Minsk gymnasium No. 174 to administrative responsibility for disparaging remarks about the teenager‘s using Belarusian language (one of official languages) in everyday life. Such remarks may fall under article 9.22 of the Code of Administrative Offences (violation of the Legislation on Languages) and article 9.3 of the Code of Administrative Offences (insult). All agencies to which Illarion appealed (the Prosecutor’s Office in Minsk, the Administration of the Moscow District) refused to bring the teacher to administrative responsibility due to the lack of evidence of an insult on the language basis.

On May 2, a meeting of the Commission for Juvenile Affairs (CJA) took place, at which a written warning was issued to Illarion in connection with his participation in the Chernobyl Shlyakh and the prayer service on April 7.

On May 16, the mother of Illarion was summoned to the CJA. In the summoning letter, the words “arrive with the son” were deleted. The woman refused to come to the commission without her son.

On May 29, Illarion came to the graduation event in his gymnasium with the historical Belarusian white-red-white flag. This action provoked remarks from teachers. The deputy director of the gymnasium threatened to call the police.

On May 30, the mother of Illarion was summoned to a meeting of the CJA. Officials began to intimidate her and threatened her with a fine. They did not institute administrative proceedings, however.

On July 3, during picketing the Let’s Go Let’s Eat (Poyediem Poyedim) restaurant, Illarion was detained. The police wrested from his hand the telephone with which he was livestreaming, and, using physical force, put him into an OMON minibus. He was then taken to the Borovlyansky police department, where he was searched and interrogated in the absence of his parents. The teenager had spent 4.5 hours in the police department; then the juvenile inspector took him in his personal car to a nearest metro station. A report was drawn up on Illarion with reference to article 17.1 of the Code of Administrative Offences.

On June 6, the mother of Illarion received a notification from the Moscow district police department in Minsk. In it, she was informed that verification actions on her son‘s coming to the graduation event with a white-red-white flag were undertaken. The administrative case was dismissed.

On July 12, the mother of Illarion received a notification stating that in the actions of hers, as a legal representative of her son, an administrative offence was found. A reference to part 1 of article 9.4 (failure to fulfil parental duties of raising a child) was made.

On July 14, Illarion was detained while he was picketing the restaurant Let’s Go Let’s Eat. He was released in the evening of the same day, having spent three hours at the police station. The police also drew up a report under art. 17.1 (petty hooliganism). Illarion‘s parents did not come to the police station. Upon drawing up the report, the juvenile inspector took the teenager in a company car to the entrance of his house and passed him to his grandfather on a written confirmation. Illarion’s case was referred to the CJA.

On July 23, two reports were drawn up on Illarion’s mother for “failure to fulfill parental duties of raising a child” due to alleged violations by the teenager of traffic rules near the restaurant Let’s Go Let’s Eat. No further steps within these reports were taken.

On July 25, the CJA issued a warning to Illarion with reference to the report of July 14. At a meeting of the commission, the teenager was threatened that in case four more reports be drawn up on him, he would receive a fine and be sent to a “special school”.

On July 27, police officers in civilian clothes came to Illarion’s grandmother‘s apartment. In a conversation, they mentioned the teenager’s posts in social media about the prayer service in which he planned to participate that day. The police then proposed to go to the department. After the refusal, they took the keys from Illarion‘s grandfather, left the apartment and locked it outside, saying that they would not let anyone out or in. 4.5 hours later Illarion was released, the keys were given to the owners of the apartment. No report was drawn up.

On August 1, a report was drawn up on Illarion with reference to art. 17.1 of the Code of Administrative Offences (petty hooliganism). The report stated that Illarion “climbed up a tree with the intention to hang a flag with the Pahonya coat of arms and shouted out loud: Zhivye Belarus’! (Long live Belarus!), and ignored any remarks.” The incident referred to in the report occurred on July 31. Illarion acknowledged that he really climbed up a tree that day and talked to his friends; but he said he climbed down on the first request of the police. The flag at the time of detention was in his backpack, and he was not going to hang it.

Conclusions of Our House experts and human rights activists:

1. The right to freedom of association and assembly (article 15 of the Convention and article 26 of the Law of the Republic of Belarus “On the Rights of the Child”). Illarion’s participation in religious events (prayers), his activity in the Young Front organization, participation in picketing an entertainment complex (restaurant) located near Kuropaty, the memorial to the victims of Stalin’s repressions, became reasons for taking punitive measures against the teenager: detention, restriction of freedom, summons to the commission on juvenile affairs, threats of being sent to a special institution. At the same time, neither adults nor children are prohibited by the Belarusian legislation to pray and take part in religious services. We think that the use of such measures is intended to intimidate and suppress the active expression of civic position by the teenager.

2. The right to non-discrimination (article 2 of the Convention and article 6 of the Law of the Republic of Belarus “On the Rights of the Child”). Using in everyday life Belarusian language, which is one of official languages in Belarus, Illarion faced illegal, offensive and disparaging comments from teachers of the gymnasium in which he studied. The teenager also faced discrimination when he came to the graduation event at his school with a historical Belarusian symbol (white-red-white flag). This symbol is not prohibited by the Belarusian law, so the requirement to remove the flag and threats of administrative prosecution had no legal basis.

3. The right to express his/her views freely in all matters affecting him/her (article 12 of the Convention). Illarion faced a violation of this right when the juvenile commission refused to consider his case in his presence. Thus, the teenager was deprived of the opportunity to speak out in defence and substantiate his position on the charges against him, which could affect the decision of the commission.

4. The right to freedom from degrading treatment or punishment (articles 19, 37a of the Convention). Since Illarion’s participation in the prayer service in April 2019, “educational measures” have been applied to him. The teenager has repeatedly, and in front of classmates, been called to a social educator, where he was subject to psychological pressure in the form of threats of administrative prosecution. Besides, during meetings of the CJA, threats of sending him to a special school were expressed.

These threats had no legal basis. The teenager did not violate the legislation of the Republic of Belarus in none of the following cases:

i) participation in prayer services;

iii) being in the area adjacent to the restaurant Let’s Go Let’s Eat;

In conclusion, it should be noted that the Code of the Republic of Belarus “On Education” (as amended in 2014) introduced the institution of disciplinary responsibility of students, and allows for expelling a student from the school if he/she has turned 16. The many penalties that Illarion has received may soon become an obstacle to the realization of his right to education. The way this norm has been applied so far shows that it mostly affects the schoolchildren and university students having an active civic and political position, which contradict the official policy of the Belarusian state.

The repressive measures that are unlawfully applied to underage minor Illarion Trusov are, in our opinion, aimed at forcing the teenager to forgo civic activism. At the same time, one of the means of achieving this goal is harassing the relatives of Illarion: they are subject to a “blow” in order to force them influence the teenager so that he restrict his activity.

Broadly taken, the case of Illarion clearly demonstrates the authorities’ intention to prevent building a civil society in Belarus at the fundamental level, which is the level of politically and socially active young people interested in structural changes.