This monitoring seeks to draw attention to the initiated but very intense relationship between the Lukashenko family and Ramzan Kadyrov. First and foremost, the close contacts between Viktor Lukashenko, son and aide to the president in the National Security Council, and Ramzan Kadyrov on issues of “Belarusian national security”.

Why is it so important? We suspect, on the basis of these close contacts, that Belarusian militants were trained at a special forces base in Chechnya. This is evidenced by the nature of the torture, as well as the public apology on video of people under torture, which Ramzan Kadyrov is known to like to practice, but has also been recently used by Belarusian militants (following increased contacts between Lukashenko and Kadyrov).

We would like to draw your attention to the fact that along with the strengthening of contacts with Ramzan Kadyrov and Chechen militants, Alexander Lukashenko not only admitted that he had given orders for extrajudicial executions, but also called on officials to “take guns and restore order”.

We call for the situation to be closely monitored in order to prevent the return of extrajudicial executions and the abduction of politicians and journalists in Belarus, using techniques or even directly by Chechen special forces.

Here is a chronicle of events that not everyone knows about, and which are justifiably worrying.

Chapter 1. In September 2017, Ramzan Kadyrov visits Minsk for the first time in his life, almost immediately after the Zapad-2017 Russian-Belarusian military exercise. Viktor Lukashenko meets with Ramzan Kadyrov and discusses “Belarusian national security” with him.

Chapter 3. In May 2018, representatives of the ultra-right pro-Russian party and Lukashenko’s pocket party LDPB (Liberal Democratic Party of Belarus) travel to Grozny to “discuss the glorious past of the Chechen and Belarusian peoples” and meet with parliament there.

Chapter 4. In June 2018, after a meeting with Vladimir Putin, Alexander Lukashenko unexpectedly called on officials to “take guns and bring order”. This is the second call for extrajudicial executions in 2018.

Chapter 6. Alexander Lukashenko awarded Ramzan the highest award of Belarus for foreign citizens with the “Order of Friendship of Peoples”. In addition to Kadyrov, Lukashenko awarded this Order to Putin, Hugo Chavez and Ilhar Aliyev. For what services to Lukashenka Kadyrov received this award is unknown.

Chapter 7. A visit to Minsk by Chechen militants at the personal invitation of Viktor Lukashenko, son of Alexander Lukashenko.

Chapter 8. On June 21, 2019, Ramzan Kadyrov flew to Minsk for the opening of the II European Games. Lukashenko awarded him with the “Order of Friendship of Peoples”.

Chapter 9. On October 5, 2019, Lukashenko congratulated Kadyrov on his birthday and noted in a letter that Belarusians are happy with the achievements of the Chechen people.

Chapter 10. On July 4, 2020, Kadyrov congratulated the people of Belarus on Independence Day and stated that he was proud of the friendship between Chechnya and Belarus.

Chapter 11. On August 10, 2020, Ramzan Kadyrov congratulated Lukashenko on his victory in the elections.

Chapter 12. On August 31, 2020, Kadyrov congratulated Lukashenko on his birthday and called on Belarusians to support him.

Chapter 13. The press tour of Russian and Belarusian journalists to Chechnya ended on 4 November 2020.

Chapter 1. The first visit of Ramzan Kadyrov to Minsk in September 2017.

Alexander Lukashenko himself explained the visit by his desire to develop cooperation with the Chechen Republic with a focus on “high technology”, which is very strange. Chechnya is not positioning itself as a territory of “high technology”, especially under Ramzan Kadyrov. Also, Alexander Lukashenko proposed to develop car production in Chechnya, which is even more strange, given that Belarus itself is not a country with a reputation for an automobile manufacturer.

Video of the meeting between Ramzan Kadyrov and Alexander Lukashenko in Minsk.

But Kadyrov met not only with Alexander Lukashenko, but also with Viktor Lukashenko, with whom he discussed issues of Belarus’s national security, which sounds very strange. It should be recalled that Viktor Lukashenko is an assistant to the President and a member of the Security Council. The same Council previously headed by Sheiman, now accused of kidnappings and extrajudicial executions of Belarusian opposition leaders in the 1990s and personally in charge of all corruption schemes of Alexander Lukashenko. It also includes many of those accused of kidnappings and extrajudicial executions of opposition and journalists in the 1990s. In addition to Sheiman, the Council includes former leaders of the KGB at various times, who led the bloodiest repressions in Belarus, including the dispersal of a peaceful demonstration on December 19, 2010.

Photo from the meeting of Viktor Lukashenko and Ramzan Kadyrov in Minsk, taken on September 29, 2017 following the discussion of the “national security of Belarus”. 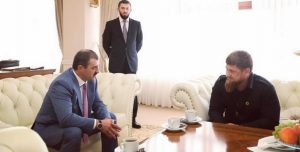 On 4 April 2018, in an “Address to the Nation and Parliament”, Alexander Lukashenko unexpectedly confessed to organising extrajudicial executions and threatened to do the same in the future: “Or should I take brutal measures like in his first years as president, when people were killed on the Moscow-Berlin motorway? When did I send a handful of reliable men with machine guns to shoot half the people there and restore order within a month?” In fact, this is a direct threat to restore the “death squad” to kill people on the orders of Lukashenko.

The link to this video.

Chapter 3. In May 2018, Lukashenko’s ultra-right pro-Russian party, the LDPB, travels to Grozny for the first time to “discuss the glorious past of the Chechen and Belarusian peoples” and meet with parliament there.

On May 24-25, 2018, Chechnya was unexpectedly visited by the deputy chairman of the LDPB, the ultra-right party of Belarus, which signed an agreement on cooperation with a number of far-right parties in Europe (National Front of France, Freedom Party of Austria, contacts with Alternative for Germany, etc.). Again, the strange purpose of the LDPB visit and their contacts with Chechen politicians was voiced in public space: it was announced that both sides discussed the “glorious heroic past of our friendly peoples.” But the Belarusian people historically do not and did not have any heroic common past with the Chechen people, except perhaps the common participation of the leadership of the communist parties in the Stalinist repressions of the 30s of the twentieth century within the USSR. And before this visit, the past had not been discussed since the very emergence of independence of Belarus, which makes one think about the goals of the trip of the LDPB representative and the deputy of the National Assembly. And by whom he was sent there. 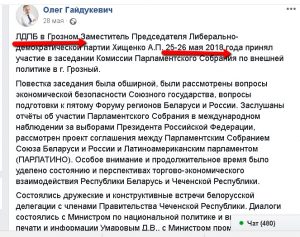 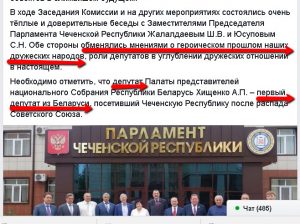 On June 23, 2018, Alexander Lukashenko said: “If you want, walking formation, if you want, take your pistols and put things in order here“. “Putting things in order” is an analogy with the Stalinist “purges”, that is, mass executions of civilians by the NKVD / KGB structures in the middle of the twentieth century. In fact, this is a direct appeal to officials and security officials to shoot dissenting civilians.

The link to this video.

Chapter 5. Viktor Lukashenko goes to Chechnya to meet with Ramzan Kadyrov and again to discuss “Belarusian national security” with him, and also meets with the Chechen special forces.

On June 25-27, 2018, the presidential aide for national security Viktor Lukashenko, son of Alexander Lukashenko, flew to Chechnya and met with Ramzan Kadyrov. 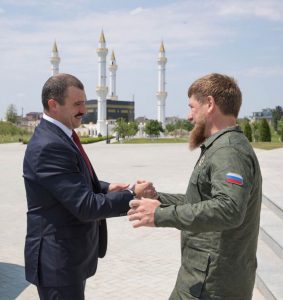 The official purpose of the visit is to see Lake Kezenoy-am and eat barbecue with Ramzan Kadyrov. Seriously?

The link to the video of the meeting.

But the real purpose of the visit is of great interest to us. The purpose of the visit cannot be economic: Ramzan Kadyrov has nothing to give Lukashenko, he does not buy Belarusian tractors, he does not give out loans and grants. Political lobbying in Moscow cannot be the goal either, because Ramzan Kadyrov is not the figure who will help in resolving the rapidly developing crisis between Lukashenko and Putin. Let us remind you that Viktor Lukashenko, who for some reason the Chechen media modestly described as “the presidential aide for national security,” is, first of all, the son of this very president, whom he trusts.

It turns out that Ramzan Kadyrov was not just a random person and not a simple official position, but a man who is trusted by Lukashenko personally and especially in matters of national (i.e. personal) security. And they didn’t even bother to come up with a reason.

Particularly worrying is the fact that Viktor Lukashenko visited the Russian Special Forces Training University with Kadyrov (apparently, between the lake and the shashlik, he accidentally wandered into a very narrow circle of specialists). Kadyrov himself boasted about this in his twitter: “The soldiers of the instructor group and the employees of special forces demonstrated their skill in conducting special operations… Viktor Aleksandrovich, being well acquainted with military affairs, noted that the capabilities of the RUS are very high. And they can be used to improve the qualifications of Belarusian special forces officers.” Kadyrov also boasted that the best conditions in the world have been created for the training of special forces.

Why does Lukashenka need Chechen special forces? How necessary are special operations within Belarus?

Intensified recent contacts between Lukashenko’s family and Ramazn Kadyrov over issues of “Belarusian national security,” which Lukashenko understands exclusively as a matter of holding and maintaining his personal personal power, as well as Lukashenko’s public threats of extrajudicial executions, are cause for concern and apprehension.

And these events, let us note, are not between different states. It is between the state of Belarus and a small, albeit largely autonomous, part of Russia.

Chapter 6. Alexander Lukashenko awarded Ramzan the highest award of Belarus for foreign citizens with the “Order of Friendship of Peoples”, but it is not clear for what merits.

Not a single representative of the EU countries has received this award. But it is owned by the leaders of personally “friendly” Lukashenko countries Vladimir Putin, Ilham Aliyev, Hugo Chavez, as well as the former director of Russian foreign intelligence Sergei Lebedev, CSTO secretary general Nikolai Bordyuzha, the patriarchs of the Russian Orthodox Church Alexy II and Kirill, the owner of “Itera” Igor Makarov, the former mayor Moscow Yuri Luzhkov.

Chapter 7. A visit to Minsk by Chechen militants at the personal invitation of Viktor Lukashenko, son of Alexander Lukashenko.

On October 28, 2018, Kadyrov’s militants arrived in Minsk, the head of Chechnya Ramzan Kadyrov himself talked about this on his page in the social network “VKontakte” 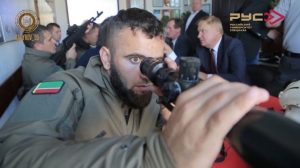 The instructors of the Russian University of Special Forces were invited to Belarus and personally met by the President’s Assistant for National Security Viktor Lukashenko.

Here is a screenshot from his page (then Kadyrov deleted it): 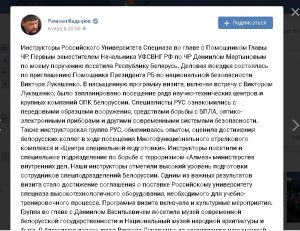 Chapter 8. On June 21, 2019, Ramzan Kadyrov flew to Minsk for the opening of the II European Games. Lukashenko awarded him with the “Order of Friendship of Peoples”.

Chapter 9. On October 5, 2019, Lukashenko congratulated Kadyrov on his birthday and noted in a letter that Belarusians are happy with the achievements of the Chechen people. 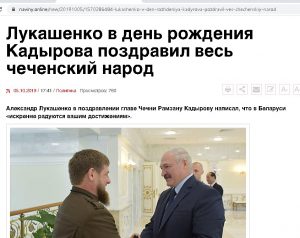 Chapter 10. On July 4, 2020, Kadyrov congratulated the people of Belarus on Independence Day and stated that he was proud of the friendship between Chechnya and Belarus. 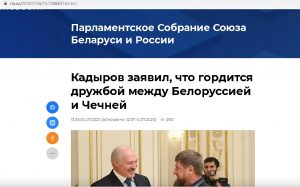 Chapter 11. On August 10, 2020, Ramzan Kadyrov congratulated Lukashenko on his victory in the elections. 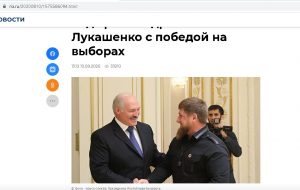 Chapter 12. On August 31, 2020, Kadyrov congratulated Lukashenko on his birthday and called on Belarusians to support him.

Chapter 13. The press tour of Russian and Belarusian journalists to Chechnya ended on 4 November 2020. 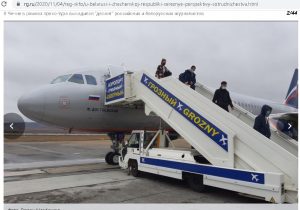 We propose to discuss questions that remain open:

We urge all of you to follow the development of events very closely and, if possible, warn Alexander Lukashenko about the inadmissibility of using Chechen militants and the revival of “death squads” in Belarus.