The most magnificent time is ahead – Christmas and New Year holidays. Bright Christmas trees and windows are decorated in many countries, and people prepare gifts. People make up the results of the year and goals for the next one. In Belarus, the second New Year will pass under repression and fear. This week we will talk about how an illegitimate state, like a Grinch from a famous cartoon, takes away a holiday from Belarusians, turning it into ideology and politics.

The main symbol of the New Year celebration is, of course, the Christmas tree. And if you imagine a tree that shines with colourful lights and glitters with balls, then forget it. In Belarus, even Christmas decorations have ideological overtones. Nothing white combined with red, no hints of protest or even the slightest disagreement with the policy of the regime. No one cares about the quality and aesthetics of the result. We made sure of this after seeing photos of New Year beauties in different cities of Belarus. 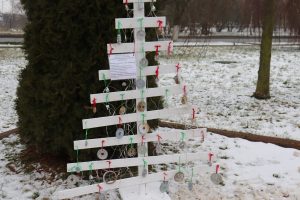 The district contest “Creative-Christmas Tree 2022” was held in Lida, in which the Christmas trees of state enterprises of the district participated. The winners got determined by a jury consisting of the chairman of the District Council of Deputies Inessa Belush, First deputy chairman of the district executive committee Igor Kvasovka, deputy chairman of the district executive committee Andrei Kovriga, heads of the Department of ideological work and Youth Affairs Irina Rabets and culture Natalia Levshunova. Christmas trees made of gingerbread, radio components, gears, light bulbs, “trees” made of ecological materials were presented to the court. It was not without ideology. In the photo, you can see a Christmas tree decorated with red and green ribbons in the colour of the Lukashenka flag. 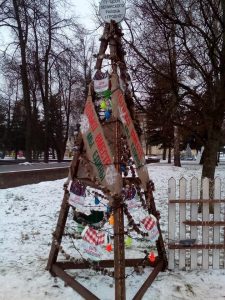 A similar competition passed in Grodno. We were particularly impressed by the masterpiece from the territorial service centre of the city. The metal pyramid structure was wrapped with festive rain, garlands and balloons. And around the perimeter, they pasted leaflets with red-green phrases “to be friendly”, “to be caring”, “to be sincere”, and the like. And also decorated with signs with ideologically correct inscriptions: “Only together we are united.” 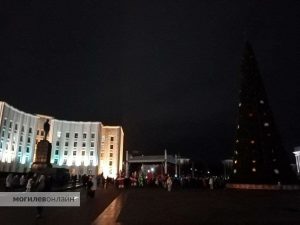 But something went wrong with the Christmas tree in Mogilev. Its lights were supposed to be lit on December 17, but it didn’t work out. The fir tree was constantly rotting in front of the Mogilev residents who gathered here. After several unsuccessful attempts to light the lights, the lanterns on Lenin Square went out. However, the holiday still took place. It turned out to light the garland. 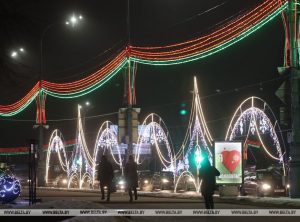 It was not without politics when decorating the streets of Gomel. Garlands in red and green colours were here. On Lenin Square, Christmas trees have green and red lights. There are also red stars on the top. Other elements of illumination also combined the colours of the national flag. The main Christmas tree of Gomel also shone with red-green lights. 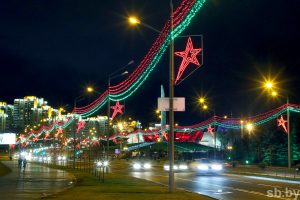 The same picture has developed in Minsk. Red stars and red-green garlands appeared on Pobediteley Avenue. And the Christmas tree is surrounded by posters in the colour of the national flag. Red-green elements are also present inside the glowing balls and animals. On the main Christmas tree of the country on Oktyabrskaya Square, garlands also shine with red-green flowers. 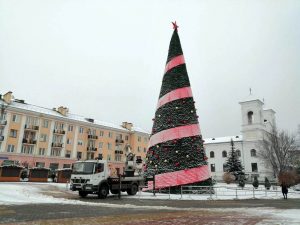 And in Brest, the Christmas tree is red-green not only in the evening but also in the afternoon. The tree is decorated with a red strip along with the entire height. In the evenings, congratulations created by Brest residents appear on this tape. And next to the Christmas tree, there is a glowing figure of a New Year’s gift – red with a green “ribbon”. The Honoured Artist of Belarus, deputy of the House of Representatives of the National Assembly of the Republic of Belarus of the VI convocation Irina Dorofeeva came to the opening of the main Christmas tree of the city.

Meanwhile, Belarusians decorate their houses and windows in white-red-white colours. However, you can get a fine and a day of imprisonment. In December last year, a 26-year-old girl was detained in Skidel, who painted graffiti: storks, a New Year tree with the inscription “Long Live Belarus”, the national emblem “Chase” – at several stops in the city and the Grodno district. The police found a stencil and paint at the suspect’s house during the search. The girl got charged with property damage (Article 218 of the Criminal Code).

And at the beginning of this year, Belarusian law enforcement officers began to hold people accountable for white-red-white jewellery. On January 14, 2021, a new Code of Administrative Offences got adopted in Belarus. It tightened the punishment for white-red-white flags hung on the windows. Belarusians began getting fines for everything combining white and red colours: blankets, TV boxes and Christmas decorations. On March 19, 2021, the court of the Sovetsky district of Minsk gave 52-year-old Minsk resident Igor Lemeshev 15 days. Three red and white hearts, which he pasted on his window, were regarded as an unauthorized picket. Igor Lemeshev said that he made and glued these hearts together with the children for the New Year and decided not to take them off. The judge asked why Igor did not make green hearts. Igor Lemeshev replied that a red heart is normal.

Minsk resident, Ekaterina, decorated her window with white and red snowflakes for the New Year. The “boomerang” from the security forces flew to her for this in May 2021 – by that time, Ekaterina was six months pregnant. The police came for her in the morning and were going with her in the car around the city for several hours. Ekaterina couldn’t eat and take expensive pills that needed to be drunk at a set time. At the police station, a report was drawn up on the girl under article 24.23 of the Administrative Code for an unauthorized event, after which she got released home. She got asked if she had received permission to picket, to which the girl was surprised that it was necessary to ask for a permit for Christmas decorations. Ekaterina got fined 2,900 rubles.

At the same time, 34-year-old Vladimir Poluyan got detained for Christmas decorations. The man hung white and orange snowflakes on the window. The Department for Combating Economic Crimes employees wrote that he publicly expressed his socio-political views and placed snowflakes of red and white colouring on the window, which “intentionally violated the Law on Mass Events.” In court, the man got sentenced to 10 days of administrative arrest. 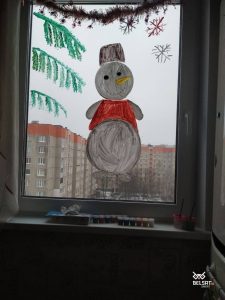 At the beginning of this year, we prepared monitoring of repressions against dolls and snowmen in Belarus. After all, the traditional attributes of snowmen are red scarves. One of the impressive stories is about how on January 12, 2021, an unknown man in civilian clothes broke into a woman’s apartment because of a snowman painted on the glass and threatened her with problems if she did not remove the snowman from the window. 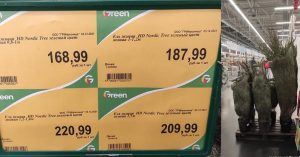 Another unpleasant surprise for many Belarusians is the prices of live Christmas trees. This year, a small Christmas tree can cost a substantial part of the salary in Minsk, not to mention small towns. In Minsk, you will pay about 170 rubles for a tree from 0,8 to 1 meter. For a forest beauty with a height of 1 to 1.2 meters, they offered to pay about 190 rubles. A tree from 1.2 to 1.4 meters costs about 220 rubles, a tree from 1.5 meters – 210 rubles. The now fashionable fir in a pot costs approximately 80 rubles. Recall that most salaries in Belarus are in the range of 700-1000 rubles, which means that a tree for 170 rubles will be expensive for many Belarusians. We studied the price tags for Christmas trees in the regions – alas, there are practically no differences from Minsk, but people earn 300-400 rubles there.

For the second year, the New Year holidays in Belarus are overshadowed by tragic events in the country and the realization that many will spend these days away from home: in other countries, in colonies, pre-trial detention centres and the Central Detention Center on the Outskirts. Belarus, unfortunately, has turned into a country where there is no place for joy, for Christmas miracles. Even on holidays, the need to support Lukashenka intervenes. But we know for sure that all Belarusians do not stop believing in the best – changes in the country – and will make this wish at the festive table.