On election day, protests broke out in the regional center of the Brest region, as in many other cities. The procession of locals marched through the main streets with slogans and stopped at the City Executive Committee, where they were met by the riot police. And although there were no mass arrests in the city, the next morning the Investigative Committee opened a criminal case on the facts of the riots. Now there are 14 suspects in the case, who are awaiting the courts.

What happened in Pinsk? 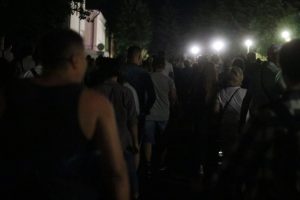 After the elections on August 9, about 100 people gathered in the park behind the monument to the “Partisans of Polesie”. At first, they just stood around discussing the news. The Internet was already off, and as soon as the election results and the national exit polls came out, they switched to them. The crowd hooted, “How 80 percent?!” – and decided to go to the city executive committee to find out how the city voted. The column was accompanied by several police officers and patrol cars. On the way to the city executive committee on Pervomayskaya street, several people were detained, but the demonstrators continued on their way. They marched peacefully, someone tried to provoke them, but they were immediately contained. 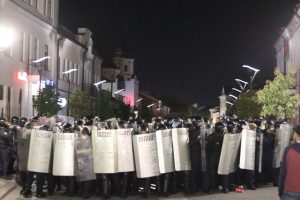 As a result, a column of about 500 residents of the city gathered on Lenin Street. Residents of Pinsk moved through the city shouting, “For Freedom! We Believe! We can! We will win! Changes!”, then stopped near the city executive committee. Here the road was blocked by a cordon of security forces. By that time, the column had grown to 1000 people, who called on the security officials to go over to the side of the people.

Dzmitry Korovyakovsky, the head of the police department, approached the protesters and offered to choose five people who would go to talk to the authorities. Five Pinsk residents were led behind the police shields and told to wait at the entrance to the city executive committee, but only one was allowed inside. After some time, he came out and said that what he saw did not convince him that the elections were fair.[1] 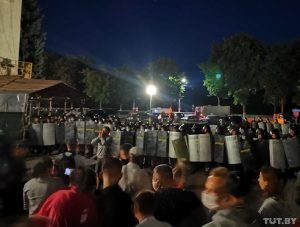 All entertainment venues and cafes in the center were closed. People were in no hurry to disperse and demanded the mayor. But by one o’clock in the morning, the ranks of the demonstrators had thinned out. The rest gathered to go to Lenin Square and at that moment the riot police ran at the people from the neighboring street. The protesters tried to negotiate with them, but the security forces deceived and surrounded them. In response, stones, sticks, boards from benches standing on Lenin Street, paving slabs flew at them. The police officers retreated to the embankment, and according to some sources, they fled to the city executive committee.

At two o’clock in the morning, about five hundred young people left the territory near the city executive committee and went to Pervomayskaya street. About 70 people were detained here. At the intersection with Central Street, the remaining demonstrators began to disperse.

The riots in the city continued the next day: a police cordon was set up near the city hall, the center was cordoned off and surrounded by traffic police cars, and the officers checked the documents of the drivers passing by. After six o’clock in the evening on August 10, they began to detain almost everyone who somehow ended up in the center. And after 10 pm, mass arrests of young people who walked along the pedestrian street began.[2]

The version of the investigation

According to official information from the Ministry of Internal Affairs, “a group of aggressively minded citizens, using pointed stakes, rods, stones and fittings, tried to organize an attack on police officers.”[3]

According to representatives of the Pinsk police, on August 9, information was received on the radio that a crowd of about 500 people from Lenin Square was going to the building of the Pinsk City Executive Committee. The security forces immediately moved towards the city administration and set up a roadblock. A line of police officers with shields, helmets and rubber truncheons lined up to prevent radicals from entering the City Executive Committee and interfere with the elections.

Dzmitry Korovyakovsky, the head of the police department, later said: “When people go for three days with clubs, stones, take to the streets every evening and day and in these hooting crowds go around and smash up the city – well, I guess that’s when the use of force is allowed. This is called harsh detention. We detained the leaders, on whom the intelligence led us, harshly. Because we knew what these people were capable of. Those who tried to beat them off received, of course, soft tissues with a rubber truncheon. It is impossible without this. It is quite elastic, soft and, when applied over the body, does not cause serious injuries. These are bruises, contusions, but nothing more.”

The criminal case against 10 accused was sent to court on February 4. The trials in the case will be held from March 23 to 25, from March 29 to April 2, and from April 5 to April 9.

Who is blamed for the riots? 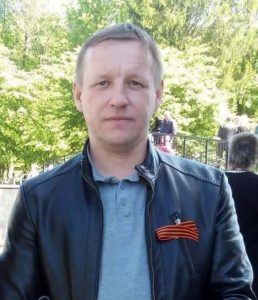 Stanislav Mikhailov was detained on August 9 when he went to drink coffee in a cafe. He managed to place an order and the security forces burst into the establishment. Then Stanislav was detained with another visitor. The man’s lawyer said she saw signs of beatings on him. Like other defendants, Stanislav was charged under part 2 of Article 293 of the Criminal Code (participation in mass riots), he is being held in a pre-trial detention center.

Grigory Gunko was detained on the night of August 10. He was charged under part 2 of article 293 of the Criminal Code (participation in riots). On December 24, he was recognized as a political prisoner. And on 5 March, Baroness Angela Smith of the British House of Lords took him up her patronage.[6] 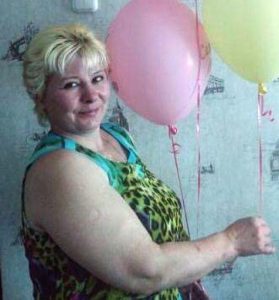 The only woman among the accused is Elena Movshuk, who worked as a nurse in the Pinsk hospital. She was detained with her husband Sergei on the night of 9-10 August. The couple were walking around the center and then they were taken to the police station together. Sergei was beaten and thrown into a police van, but was released after 17 hours, while Elena was taken to the temporary detention center. The charges were based on a video that the law enforcers found in the phone of one of the detainees: it shows a woman who looks like Elena either swinging at the law enforcers or hitting them on their shields with a stick pulled out of a flowerbed. A woman who was in the cell with Elena in the detention center said that she was beaten up in the cell. In the pre-trial detention center, Elena was recognized as aggressive and held in special conditions. Her 10-year-old daughter Angelina was taken to an orphanage. Husband Sergei is under house arrest, he will also face trial.[7]

Artur Halimonchik was arrested on the night of August 9-10. On September 4 he was recognized as a political prisoner. His “guardian” is a member of the German Bundestag Dietrich Monstadt. Arthur was charged under part 2 of article 293 of the Criminal Code (participation in riots). He is being held in a pre-trial detention center in Brest. 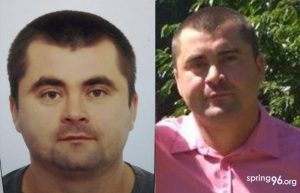 Taxi driver Vyacheslav Rogashchuk was brutally detained on August 10 in front of his sister and 12-year-old nephew. For three days he was severely beaten. Vyacheslav’s cellmate said that he had a very large hanging hematoma behind his ear, three wounds on his head, and all the vertebrae had black round bruises. He was beaten the most in the cell. The man was not provided with medical assistance in the pre-trial detention center, the doctor came to him only at the beginning of October. He was diagnosed with a micro stroke. Vyacheslav has three minor children: six, seven and nine years old.[8] 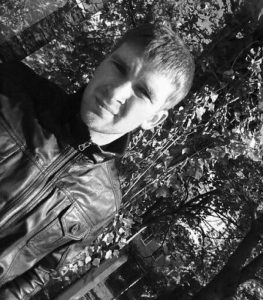 Roman Bagnovets, 36, was detained on August 10. Before his arrest, he worked as a monolith in Minsk, and came to Pinsk on the eve of the elections on family matters: it was necessary to draw up documents after the death of his mother. According to his sister, that day he was not going anywhere, but when the Internet was turned off at lunchtime, he decided to take a walk around the city. From 20.30 to 00.00 he was in a pizzeria, but then he went to the city. Around midnight, Roman’s sister heard screams in the street and called her brother to make sure he was okay. “I tell him to go home quickly. And he said to me: “I’ll finish filming what is starting to happen here, so that I can send it to the international court”. I realised that more riot police started pulling up there at that point,” recalls the boy’s sister. Five minutes later, his phone became unavailable. Roman was charged under Part 2 of Article 293 of the Criminal Code (“Riots”). The file indicated that he had thrown a stick at the riot police.[9] 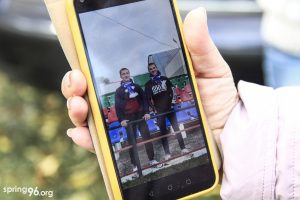 Daniil Bognat was 18 years old at the time of his arrest. On August 10, security officials seized him together with his friend, 19-year-old Oleg Rubets. The guys were united by their love for the local football club “Volna”. Both studied at the local lyceum and got a job as tractor drivers by distribution. The guys managed to work on it for less than two weeks. After the arrest, the two friends were taken to the Pinsk temporary detention facility. People detained with them said they were beaten and there were lice and ticks in the detention center itself. On hot August days, the detainees were not given water, were not allowed to use the toilet and were constantly beaten. Both are now in jail.[10] They were charged under Part 2 of Article 293 of the Criminal Code (participation in riots). 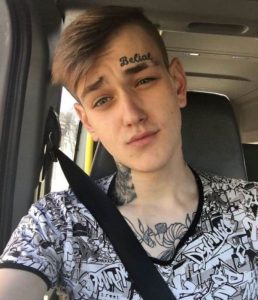 David Mostitsky was detained in the “Pinsk case” on September 2. At first, he was told that he was being held as a witness in a case brought against his friends. However, after interrogation, he was not released. At first, he was detained for 72 hours, and then transferred to a pre-trial detention center in Baranovichi and charged under part 2 of Article 293 of the Criminal Code. Note that the guy has a child who is not yet 1 year old. 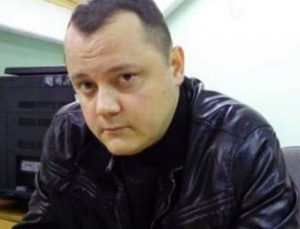 Igor Solovey studied in Poland under the Kalinouski program with a degree in political scientist-journalist. He was an activist of the “For Freedom” movement. He was detained on September 3. On September 17, Igor was recognized as a political prisoner. He is being held in a pre-trial detention center in Baranovichi.

Alexander Tereshko was detained in the Pinsk case on September 20. He was charged under part 2 of article 293 of the Criminal Code (participation in riots). He is being held in pre-trial detention center No 7 in Brest. On December 3 he was recognized as a political prisoner. 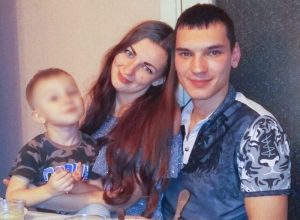 Sergei Lezhenko with his family

Sergei Lezhenko was taken into custody in the “Pinsk case” on 23 September. Although the first time he was detained on 28 August. Sergei’s wife, Olga, said that the police officers recognized the guy in the video from the protests that appeared on the Internet. Then he was sent to an isolation ward for 72 hours, then released under house arrest in the status of a suspect in participation in the riots. The second time he was detained at his workplace. The reason for changing the preventive measure was the alleged violation of the house arrest regime and the opinion of the investigation that Sergei had an intention to go abroad.[11]