Seeing women walking in white and red clothes and with umbrellas is already a tradition in Minsk as well as in other Belarusian cities. In winter, the security forces allowed them to walk freely. Despite the provocative colors, they only “carefully watched from afar.” But a recent walk ended in 25 days detention for one of the girls. 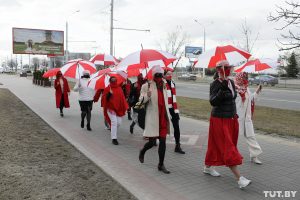 A group of women from Minsk under white and red umbrellas went for a walk along Pobediteley Avenue on April 6. The girls walked along the sidewalk, did not interfere with the traffic, smiled at passers-by and waved to a photographer. [1] The next day, the Minsk City Executive Committee Department of Internal Affairs reported that the women had been detained. The message stated that a flash mob was held on one of the main thoroughfares of the city using unregistered symbols, “as well as other attributes.”

“Police officers identified and detained active participants in the so-called women’s march. It is noteworthy that some of the detained citizens are members of a large family and live in a private house built with the help of state support in the Minsk region. During the authorized inspection of the said household, attributes associated with protest were found,” the police said. [2]

On the evening of April 7, 30-year-old Yulia Mikhailova, who was among those walking along the avenue, was detained in the Minsk region. She was stopped while walking to a bus stop to get to work. On the same day, Yulia’s 27-year-old brother Petr and her 36-year-old sister Lilia Suboch, in whose care are two minor children, were detained (she was later released). The whole family lives in a private house in Prilukskaya Sloboda, Minsk region. A search was carried out in their home. The mother of the detainees, Tatyana Mikhailova, left with the police officers. [3] 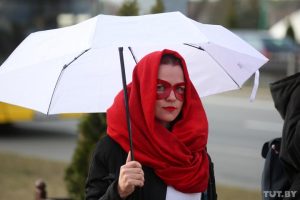 Yulia’s trial took place the day after her arrest, on April 8. According to the investigation, from 18:05 to 18:20 Yulia took part in an unauthorized march on Pobediteley Avenue in a group of ten citizens with the aim of expressing her civil-political mood, she held a white-red-white umbrella and shouted “Long live Belarus”. A photo of TUT.by was provided as evidence.

In court, the girl asked to get acquainted with the case materials, but Judge Victoria Shabunya did not give her such an opportunity justifying it by the fact that Yulia’s signature was already under the protocol. After that, Yulia burst into tears – the lawyer explained that during a confidential conversation, the girl said that “they shouted at her, threatened her, because she said that she would sign the protocol only if she was given a copy”. By the way, her umbrella was plain white.

The witness in the case was an employee of the Ministry of Internal Affairs Aleksandr Aleksandrovich, who testified under a changed name and with the face covered. He testified that on April 6, together with the OMON officers, he was on the territory of the Central District of Minsk on official duties. From 18.05 to 18.10 he noticed a group of 10 people walking with white-red-white umbrellas and shouting: “Long live Belarus!”

“We did not have time to take action to prevent the crime. As an urgent call came in, we had to drive away. When we returned, these citizens were no longer there,” said the witness.

To clarify, Yulia did not deny that she was on Pobediteley Avenue that day. She recognized herself in the photo from the walk. When the judge asked why she was in this place at the specified time, she replied that she was having a walk: “It’s not forbidden.” The result is 25 days of administrative imprisonment under Article 24.23 of the Administrative Code.

Yulia’s mother Tatyana was tried under Article 24.3 of the Administrative Code for disobedience. The protocol says, “During the arrest, the woman rested her feet on the ground and refused to proceed to the police car.” To clarify: the woman is 56 years old, she has been diagnosed with pulmonary fibrosis, at times she has difficulty breathing. Tatiana’s lawyer petitioned to summon a witness who saw the moment of her arrest and can prove that there was no disobedience. The court rejected the petition.

“I’m a believer and I won’t lie,” said Tatiana. “If this person is not afraid of God and testifies falsely, this is his choice. On April 7, I was cleaning up the house and heard a knock on the door. When I heard, ‘we are going to break open the doors, this is the police,’ I opened it. About 10-15 people entered. They scattered throughout the house. First, they looked for people, then they began to go around the house with me, inspecting every shelf and cabinet. This lasted from 15:00-16:00 until about 20:00. Then they took my phone and said, ‘come with us.’ I was left with one officer who wrote the protocol of the seizure. So nice and young, about 30 years old. I changed and we went to the car. On the way we talked, joked, it seemed to me that he was a good person.” [4]

Tatiana was sentenced to 5 days in prison.

On April 8, Yulia’s 27-year-old brother Petr was also convicted. He was also charged under Article 24.3 of the Administrative Code. According to the protocol, near the Central District Department of Internal Affairs, a young man was grabbing the policemen by their uniforms and refused to obey during the arrest. He was delivered to the Department from his native village, after detention at the bus stop while he was on the way see a doctor. In his words, he did not show any disobedience: he obediently went into the car to establish his identity, calmly waited at the police department. The policeman’s report said that Peter was detained because of the case against his sister. At the trial, the following conversation took place between the prosecution witness – a police department officer – and judge Dmitry Karsiuk:

“Did Petr enter the car voluntarily?”

“Why did he show disobedience later?”

Peter was sentenced to six days in prison.

On April 9, two more members of the Mikhailov family were detained: Yulia’s and Petr’s father Vladimir and sister Lilia Suboch. [5] Thus, the entire family of the girl who was walking with a white umbrella was arrested.

Detaining girls for simply walking down the street is the height of absurdity in a police state, where, it seems, it is only allowed to serve an illegitimate ruler and where gratitude is expected for providing basic needs for housing and food. ICCI “Our House” expresses support for Yulia Mikhailova and her family. We all believe that in the new Belarus they would receive justice.