17-year-old Dmitry Stakhovsky will never be online again – the last entry on his page appeared on May 26 at noon. The youngster was a suspect in the 9-10 August riots in Minsk. Now they will not be able to charge him – he jumped from the roof of a 16-storey building in the capital. 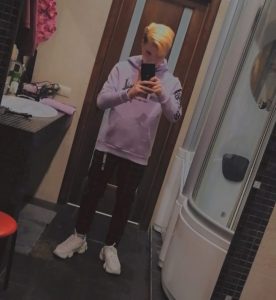 Dmitry was an orphan. He lived in a dormitory, whose staff told the investigators that he had participated in the protests. On the eve of suicide, the guy went to another interrogation, and on the evening of May 25 he decided to voluntarily die. His relatives were not informed of his death until the next day. As Dmitriy’s friend said, “They called and said Dima was gone. We only know that he jumped in the Uruchya region from a 16-storey building.”

In a suicide note on a page on social networks, Dima wrote that the Investigative Committee was to blame for his death. “It is no longer a secret that I have been charged under criminal article 293 part 2. In short, for the rallies. If the moral pressure on me had not continued, I think I would not have dared to do such a terrible act as suicide. But my strength was running out. And as you can see, I failed.”

Dmitry admitted that he received a lot of support from people. And also – that he regrets that his life was so short. He said that he had many plans, in particular, to leave the country, live and work abroad. Suicide was a difficult choice for him. “I cannot say that suicide is the solution to all your problems. No, friends. This is the wrong choice. This is the worst choice. Live. Life should be appreciated. You have one and you definitely won’t have another,” Dmitry wrote.

At the end of the message, he thanked his friends and acquaintances, as well as all the people he met in life. He added that he loved to help and do good, wished to be kinder and live “in a positive way.”

The response from the Investigative Committee appeared immediately. The official report said that Dmitry’s body was found on the night of May 26. Investigators ordered forensic and posthumous psychological and psychiatric examinations. They also reported that alcohol was found in the young man’s blood – 2.4 ppm. As for the accusations of pressure, the Interior Ministry said that the investigative actions involving Dmitriy were carried out solely in compliance with the law and in the presence of a defence lawyer.

Belarus regularly ranks among the top ten countries – leaders in the number of suicides. In 2019 we were eighth, in 2018 we were fifth. In the first quarter of 2020 alone, according to Lukashenko, there were about 400 suicides in Belarus. Public data on teenage suicides is only available for 2018: then the number of tragic cases was 28, an increase compared to 2017. The number of suicide attempts also increased – in 2018, 347 were registered, and in 2017 – 298. Already proceeding from this, one can imagine that the number of children who have committed suicide is growing. And if until 2020 teenagers died, faced with personal problems, then since last year the political factor also interferes with their desire to live.

This is not the first case of suicide in the months since the elections. Fortunately, two other publicly reported suicide attempts were unsuccessful. On September 21, 2020, a 16-year-old girl tried to throw herself from a 20-storey building in Minsk. The police squad, who arrived at the scene, managed to establish contact with the teenager and dissuade him from suicide. The policemen then dragged the girl indoors.

Another incident occurred on April 24th. A teenager from the agro-town Polessky, Luninetsky district, climbed into an abandoned building, doused himself with gasoline and set it on fire. The reason, according to the investigation, was a conversation with a girl that took place just before the act of self-immolation. The fire was noticed by residents of the house opposite, who managed to extinguish the clothes on the young man and called doctors. The guy was hospitalized with burns.

ICCI “Nash Dom” does not exclude that due to pressure from the authorities and teachers, the number of children who committed suicide will increase. Young Belarusians are deprived of children’s and youthful joys and are already going to interrogations, defending the right to have their own opinion prescribed in the Constitution, waiting for fathers, mothers, brothers and sisters from prison. Living in an unhealthy environment is dangerous for an immature psyche. And for the sake of a happy future for our children, we are obliged to overthrow the fascist regime of Lukashenko.