June 20 is World Refugee Day. For many years this problem was unfamiliar to most Belarusians, but in 2020, after the elections, other countries became the only chance to escape for thousands of beaten, unjustly convicted, persecuted by the security forces. In four months of 2021, Poland alone issued 5 thousand residence permits to Belarusians, in Lithuania, from August 1, 2020 to February 15, 9 thousand Belarusians applied for a residence permit, the country issued more than 12 thousand national visas. 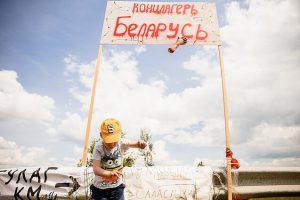 Belarusian diaspora of the world have joined the guardianship of those who fled from the Lukashenko regime. A public association “Dapamoga” has emerged in Lithuania, headed by Natalia Kolegova, a Belarusian who has been living in Lithuania for a long time. For ten months of protests, Dapamoga has provided assistance to more than 300 Belarusians. Each arriving person was met at the border, provided with a place to live and a grocery basket, clothes and shoes – many fled from the rink of repression only with documents. The Belarusians of Lithuania helped their fellow countrymen with finding a job and solving bureaucratic issues.

“Our House” has also stepped in to help the relocants. Together with the public association Dapamoga, in August 2020, the activists appealed to the Lithuanian authorities with a request to organize a humanitarian corridor for Belarusians. Since August 11, this possibility has been available – at the border, aliens declare their need for asylum and then fill in documents for the permission of the Minister of the Interior upon a motivated proposal of the Foreign Ministry to come to Lithuania due to prevailing political circumstances or other threats. 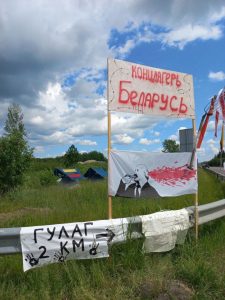 Together with “Dapamoga” ICCI “Our House” helped the Belarusian refugees to come to Lithuania and settle down here. Those who arrived were paid for grocery baskets and apartments. Among those who were helped by “Our House” to settle in Lithuania were the family of Herman and Natalia Snezhkov, Daria Elfimova, conductor Andrei Galanov, ten actors from two Grodno theaters and their families, as well as many others.

Thanks to the efforts of the ICCI “Our House”, Lithuania managed to establish relationships with caring people from all over the world, who, at the request of the organization’s activists, extended a helping hand and sent clothes for refugees. In January 2021, a group of friends from Bremen sent 60 boxes of clothes and shoes to Lithuania.

The refugees, who became temporary residents of Lithuania after the elections, have created a strong and lasting community. They organize and conduct actions, marches, flash mobs. During the evening “Light Watch” at the Belarusian embassy in Lithuania, candles are lit near portraits of murdered Lukashenko. The tent camp on the Lithuanian-Belarusian border has been operating for two weeks – during this time, the refugees carried out two actions with road blocking. “Dapamoga”, ICCI “Our House”, “Narodnaya Hramada” party, “Country for Life” foundation helped to coordinate them with the Lithuanian authorities. Refugees staged a performance by Belarusian women near the office of the European Commission. Thanks to “Our House”, the General Prosecutor’s Office of Lithuania opened a criminal case on torture against civilians in Belarus. The statement of the Belarusian, who applied to the Lithuanian internal affairs bodies within the framework of universal jurisdiction, was filed with the assistance of “Our House” on January 29. In addition, “Our House” handed over materials on torture by the security forces in Belarus to the UN High Commissioner.

In Poland, the humanitarian corridor began to operate a little later – on August 18, 2020. In the first two months after the elections, more than 700 Belarusians used the humanitarian corridor. Many Belarusians went straight from the Polish border to the refugee camp in Biala Podlaska. A multicultural center has appeared in Warsaw, which provides assistance to those who have left Belarus. They offer advice on legalization in the country, legal assistance in employment, psychological support. They also come here to get their children into school, to learn the Polish language and to adapt to their new environment. A support center for foreigners has also appeared in Bialystok. Belarusians are offered here to get advice on legalization, work, education, financial and psychological assistance, translation of documents. There is a similar organization in Lodz. Representatives of the Belarusians in Lodz Foundation offer housing opportunities for large families from Belarus in the cities of Sopot and Bydgoszcz. The organization launched programs of assistance to Belarusian women in employment, assistance in medical rehabilitation and sanatorium treatment.

One of the largest organisations is the Centre for Belarusian Solidarity, whose activities are supported by Belarusians in Poland. The organization has Polish language courses, an association of Belarusian women in Warsaw. Refugees are offered legal counselling, the preparation of procedural documents, statements, appeals and representation in governmental bodies. The centre aims to integrate relocated people into Polish life as soon as possible: it organises workshops for children, street actions, exhibitions, presentations, film screenings, excursions and flash mobs.

Those who have moved to Poland are helped not only by foundations and volunteers, but also by ordinary Belarusians. Olga Stepanova moved to Poland when her son enrolled at a university in the country. The woman saw the fragmentation of the diaspora, began to gather Belarusians for meetings, then created the group “Belarusians in Warsaw. Relocation. Adaptation” on Facebook. And after the elections, she laid the foundation for the Zachód – Wschód Wsparcie Foundation, which helps to adapt, get into university, find a job, and open a business in Poland. The foundation has a Belarusian literary club for children. 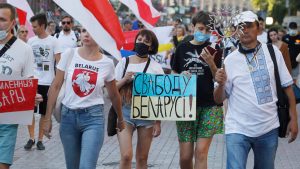 Many Belarusians chose Ukraine to move, as a close country that does not require visas. After the elections, organizations to help refugees also began to appear here, and Belarusians living in Ukraine helped with adaptation in Telegram chats, advised on obtaining a residence permit and finding a job. The first Belarusian online school has also opened in Ukraine.

An activist of the Belarusian diaspora in Ukraine, journalist Denis Lavnikevich created a public initiative “Talaka-Dnepr”. Here they help not only refugees, but also those who have chosen Ukraine to move, who need help in finding an apartment, work, and solving bureaucratic issues. 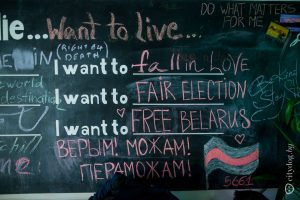 The “Rodny Kut” charity initiative met those Belarusian refugees who left their homes without anything except documents and a minimum set of things. Belarusians were provided with free accommodation in Kyiv, food, help in finding a lawyer and a psychologist, and information about other projects where they could apply. Thus, people received informational support. The initiative itself helped at the expense of the Belarusian diaspora in Ukraine, Germany, and the United States.

In recent months, a “Belarusian House in Ukraine” has appeared in the country. Its employees and volunteers provide consultations on legalization in the country, help with finding housing, training, and organize solidarity actions. Thanks to the assistance of the association, a 60-day “Watch of Light” was held near the Belarusian Embassy in Ukraine. For three days in a row, the Belarusians of Ukraine blocked the road at the checkpoint Novye Yarylovichi and Domanovo. Every weekend, a traditional solidarity rally takes place on Independence Square in Kyiv. 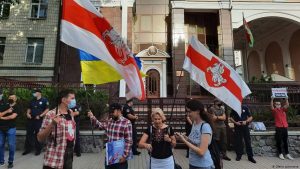 Although Ukraine is a visa-free country for Belarusians, another problem awaits them here. Until 2020, it was possible to stay in Ukraine for only three months. Therefore, the Ukrainian diaspora and the public organizations that appeared here after the elections helped the Cabinet of Ministers of Ukraine increase the length of their stay. As a result, by the end of 2021, Belarusians arriving in the country will be able to live here for up to six months without a residence permit.

In addition, the Belarusian public organizations of Ukraine offered assistance to students with applying to universities and obtaining scholarships for training. Gift delivery was organized for the Belarusian children for the New Year. 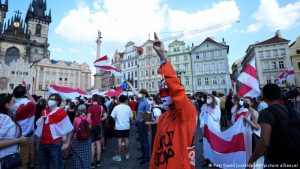 After the elections, the diaspora of the Czech Republic willingly began to accept the wounded and beaten by the security forces at the protests. Belarusian public organizations of the country created a coalition, joined forces together with the Ministry of Internal Affairs of the country – and a medical and humanitarian program MEDEVAC was launched for Belarusians. As part of this program, about 60 victims were able to come to the Czech Republic.

To verify the Belarusians in the Czech Republic, a Humanitarian Consultation has begun with the participation of local doctors of Belarusian origin. Physicians could objectively assess the types of injuries and the need for treatment in the Czech Republic for the patient. The lists of those who get into the program were approved by the country’s Ministry of Internal Affairs. 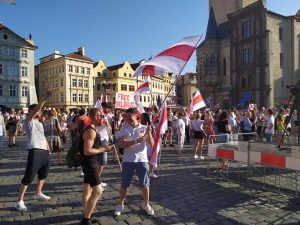 In the Czech Republic, the victims were provided not only with medical assistance, but also with international protection. Diaspora supports Belarusians in adaptation and job search. A line of psychological support was organized for them. Repressed doctors from our country also received help within the framework of the program. By applying to the program, they were able to get help with finding a job in the Czech Republic. The country’s Interior Minister Jan Hamáček said: “There is an effective tool for transporting victims to the Czech Republic and providing them with assistance.”

The program works as follows: The Czech Ministry of Foreign Affairs, through its embassies, ensures the coordination and issuance of the relevant visas on the spot. The Ministry of Health sends medical workers from Belarus for internships in medical institutions in the Czech Republic, takes care of finding suitable employers who, in addition to work, could provide housing or training in the Czech language. 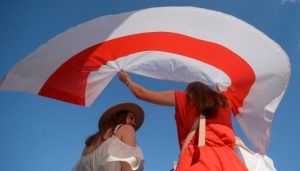 After the elections, Latvia also offered treatment and rehabilitation to Belarusians. True, a humanitarian corridor did not appear in the country, which is why the arrival of refugees took place in a different order. But Latvia has made it easier to issue visas to Belarusians – it takes a few hours to resolve the visa issue. Some of those who chose Latvia applied to the country’s embassy in Minsk, talked with the ambassador, who gave detailed instructions on crossing the border and came up with a legend of what to say at the border. Then the Belarusians ended up in a refugee detention center, where the local diaspora helped them with the arrangement.

Ambulances were waiting for refugees who needed medical attention right at the border. Belarusians underwent surgery in Latvian hospitals, sent for rehabilitation to medical institutions. Refugees received material assistance here, and then became involved in the life of the local diaspora: they organized pickets, raised funds for the Belarusians arriving in the country, worked with non-governmental organizations to issue work visas to Belarusians.

Through the efforts of refugees and the Latvian diaspora, actions of solidarity are held in the country at the embassy, actions in memory in honor of the victims and the dead. In recent months, Riga has its own “Square of Changes”. On February 7, 2021, Latvia joined the celebration of the International Day of Solidarity with Belarus. On May 29, 2021, a flash mob of solidarity with Sergei Tikhanovsky was held in the center of Riga.

On World Refugee Day, ICCI “Our House” expresses solidarity with all Belarusians who were forced to become refugees because of the regime’s actions. They have shown steadfastness in the struggle against the fascist system and now deserve a benevolent and humane attitude in other countries. The solidarity of the states of the world with Belarus is truly admirable: wherever a Belarusian victim of repression reaches, he can be sure of help, if not from the authorities, then from the local diaspora. But each of them, of course, hopes that very soon he will return home.