The whole world is now gripped by anxiety and fear because of the war that has begun in Ukraine. Belarus was dragged into aggression without its will – dictator Lukashenko confronted the people he would fight for Russia. As a result, planes, helicopters, and military equipment are being sent from our territory and inflict serious blows on Ukraine. “Our House” and “Dapamoga”, as well as representatives of the Belarusian diaspora in other countries, organize solidarity pickets in this situation. 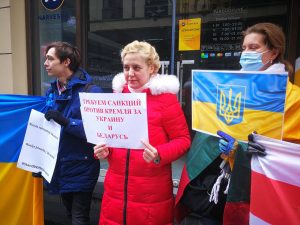 On February 22, an action against Russian aggression in Ukraine took place near the office of the European Commission in Vilnius. Belarusians of Lithuania, who are under the protection of the European Union, called on the whole world to join the action of solidarity with Ukrainians and against Putin and Lukashenko. Olga Karach, the head of the “Our House”, representatives of the public association “Dapamoga”, Belarusians of Lithuania, Lithuanian politicians and journalists participated in the action.

On the day of the beginning of Russia’s military aggression in Ukraine, on February 24, “Our House” and “Dapamoga” joined hundreds of residents of Vilnius who came out to support Ukraine in the city centre. In a video from the solidarity action, Olga Karach said that representatives of the Belarusian, Ukrainian, Georgian diasporas of Lithuania and Lithuanians participated in the rally. 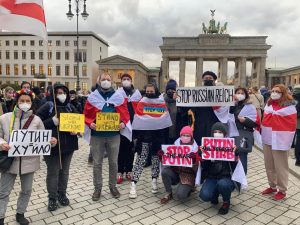 Similar actions take place not only in Lithuania but also around the world. On February 19, “Our House” published information about German action against Kremlin aggression. Belarusians of North Rhine-Westphalia took part in it. Ukrainians living in the city and the outskirts also came out to the action, which took place in Dusseldorf. It is not the first action of the residents of North Rhine-Westphalia. The marches in Germany continue: rallies of solidarity with Ukraine are planned in several cities in each country. Representatives of the Belarusian diaspora in Berlin took part in a huge rally in Berlin on February 24, among them was the philosopher Olga Shparaga. A joint march of the Belarusian, Ukrainian and Russian diasporas representatives took place in Frankfurt am Main. In Munich, the Russian embassy was painted over with red paint – the colour of bloodshed by Ukrainian soldiers. The actions take place in Heidelberg and Hamburg.

In Poland, actions against the Kremlin’s military aggression are taking place at the Russian Embassy in Warsaw. Representatives of the Belarusian diaspora take part in it. On February 24, at the next rally of solidarity with Ukraine, Belarusians of Warsaw stood in a circle and sang the Ukrainian anthem. Belarusians gathered in Krakow under the Russian consulate. On February 25, protest actions are planned here under the offices of German companies since Germany did not support anti-Russian sanctions.

In Latvia, several dozen people gathered at the Russian Embassy in Riga. People came out to the embassy with posters and flags, with calls to live together and stop the war. Among the participants were representatives of the Belarusian diaspora and activists of “Our House” in Latvia. 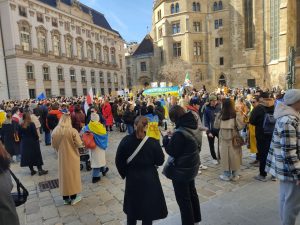 We express our gratitude to all Belarusians who came out to protest against dictator Putin, who attacked Russia, and against Lukashenko, his faithful puppet. We hope that the war will end with Ukraine’s victory and bring the end of both dictators closer. And we believe that such actions will give the Ukrainian military the strength to fight the aggressor and protect their country.