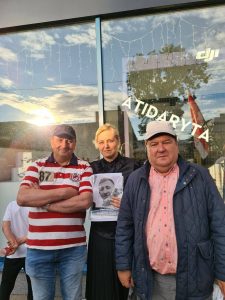 Belarusians escaped from Lukashenka’s repressions, Ukrainians and Lithuanians living in Vilnius gathered at the Lithuanian rally. Among them are the deputy of the Lithuanian Seimas Emmanuelis Zingeris, the Lithuanian public figure Valdas Bartkevicius, the head of the public organization “Dapamoga” Natalia Kolegova, representatives of the “Narodnaya Gramada” party. On this day, a new portrait of another person killed by the Lukashenka regime appeared at the embassy, and new candles were lit next to the funeral photos.

According to Olga Karach, the murder of Vital Shyshou is political: “We, Belarusians of the whole world, demand an investigation of the murder of our compatriot and the introduction of immediate sanctions against the bluing psychosis by the world democratic community. Those responsible for this brutal massacre of a Belarusian activist who helped Belarusian refugees in Ukraine should be punished!” 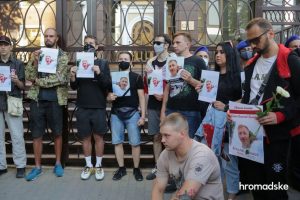 The action in memory of Vital Shyshou took place on August 3 in Kyiv. Friends of the murdered man, representatives of Belarusian public organizations and Belarusians living in Kyiv gathered at the Belarusian Embassy in Ukraine.

“I ask all of you: stop walking around with flowers, posters. We will not solve anything by peaceful protest. Yesterday it happened to Vitalik, tomorrow it will happen to you. And they don’t care,” said the girl of the murdered Bozhena Zholud.

The editor-in-chief of the publication “Ukrainska Pravda” Sevgil Musayeva recalled at the rally about the murder of Belarusian journalist Pavel Sheremet in Kyiv five years ago:

– Pavel Sheremet was killed five years ago, and his killers have not yet been found. Looking at everything that happened in Belarus over the past year, I understand that the Belarusian special services are most likely involved. I want people who ended up in Ukraine because there is such a regime in their country to feel safe here. 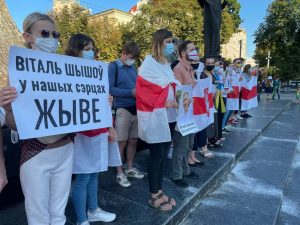 Belarusians of Odesa and Lviv came out to honour the memory of the activist killed by the regime. Citizens of Biala Podlaska, Szczecin, Poznan, Wroclaw and Warsaw also joined the memorial actions. Belarusians of Warsaw petitioned that Ukraine should investigate the murder in Kyiv and also clarified that they would like an international trial of the murderers of Vital Shyshou. The Ambassador of Ukraine to Poland, Andriy Deshchytsia, came out to the audience for the memorial action:

– We are interested in finding out what happened. We are here to transfer information from you to Kyiv. We need to hear from you. We, as representatives of the government, are ready to transmit information to Kyiv. It is a challenge for our law enforcement agencies to make Belarusian citizens feel safe in Ukraine. The same applies to Ukrainians because they help Belarusians. And if violence is used against them, then the citizens of Ukraine will also feel bad. I do not rule out that it could have been a demonstrative murder to show that Belarusians are not safe in Ukraine either. It is the task of our law enforcement agencies – to provide comfortable conditions. It is important for us that we have good relations with our neighbours, with a democratic Belarus.

ICCI “Our House” is sure that the murder of Vitaly Shishov is exclusively political. Lukashenka wants to intimidate activists abroad, to silence them, to stop demanding sanctions. Even better to return them to their homeland, where they amicably confess their love to the dictator. However, we believe that the Ukrainian police will sort out the murder of Vital Shyshou, and official Kyiv will stop all relations with Minsk until Lukashenka leaves his post. After all, tomorrow usurper’s special services may come home to the Ukrainians.