On April 11, an action devoted to all dead at the Kastryčnickaja station ten years ago took place in the centre of Vilnius. The explosion claimed the lives of 15 Belarusians. Lacking any reliable evidence, Lukashenka declared guilty and shot two 25-year-old residents of Vitebsk: Dmitry Konovalov and Vladislav Kovalev. Olga Karach, the head of the ICCI «Our House», also commemorated the victims. 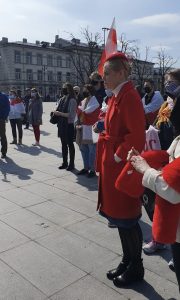 Today’s action gathered dozens of Belarusians and Lithuanians who wished to honour the memory of killed in the Minsk metro in 2011. The ceremony began on Lukishki Square with a speech of public and political figures of both countries. Olga Karach shared her story related to the events of ten years ago:

«I am firmly convinced that Dzmitry Kanavalau and Uladzislau Kavaliou were not guilty. All detained on suspicion of this terrible crime also did not commit it. It is hard for me to talk about it. I cannot explain to you what I have seen. I was deprived of my relatives for a year. Throughout the year, they were afraid to call me. Only a year later, timid congratulations on the New Year and other holidays began. I know what does the status of a terrorist mean in Belarus. It is not a secret for me to get charged with a crime when you are not guilty. I accuse Lukashenka of committing this and other terrorist attacks. We will not forget this and will not forgive».

A touching performance from Hrodna actors helped to recall the stories of the victims, their relatives and witnesses of the tragedy. One of the stories was the story of the mother of the executed Uladzislau Kavaliou:

«Already on April 13 at 9 a.m., I heard Lukashenka’s statement on the radio that the criminals were detained and would get the most severe punishment: death penalty. He said that, by 5 a.m., the guys confessed everything. But the court has no proofs of their guilt. They confessed under torture. It is unreal to commit such a terrorist attack alone. The whole system worked, and they made our sons guilty. With a favourable outcome of the situation, they would sooner or later tell the truth, so the authorities could not leave them alive». 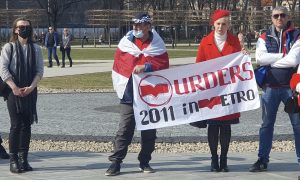 Participants of the action remembered 17 victims of the terrorist attack with a minute of silence. After it, they marched from Lukishki Square to the building of the Embassy of Belarus. The head of the organization «Dapamoga» Nataliya Kolegova, Lithuanian public figure and deputy Valdas Bartkevichus, representatives of the «Country for Life» foundation took part in the action. ICCI «Our House» expresses condolences to the relatives and friends of all killed in a terrorist attack and the authorities actions. We promise that in the new and free Belarus criminals will be responsible for the attack under the law and the Belarusian people.

Ten years since the terrorist attack in the Minsk metro: we recall the chronology of the tragedy

Olga Karach took part in the “March of Flowers” in Vilnius

ICCI «Our House» demands to stop torture against Olga Zolotar

April 11 – International Day of the liberation of the Nazi concentration camp. We talk about the «patriotism» of the Belarusian authorities
2021-04-12 at 00:32 Svetlana Gordeeva News