The outbreak of war in Ukraine has given a new impetus to the Belarusan protest. The Belarusians continue expressing their discontent with the presence of Russian troops in the country and the attack on Ukraine. Not only the rail war, which we have already mentioned but also posters, comments on social networks and reports of Russian military equipment in Belarus are in action. The illegitimate state continues to repress those who say “no” to the war.

On February 24, Aliaksandr Mironau got detained in Zhodzina. He got accused of having called for everyone to gather at 5 p.m. near the Green shop to protest against Russia’s war with Ukraine. The security forces forced Alexander to record a repentant video and tell the camera that he was remorseful for his actions. Alexander also confessed to calling for unauthorised mass events in 2020. It is unknown where the Zhodzina resident is at the moment.

At the end of February, a lyceum student from Homel region took a picture of Russian military equipment and sent it to a Telegram channel recognized as extremist by the illegitimate authorities. A criminal case was opened against the minor for the facilitation of extremist activity. The boy got detained.

On March 3, Andrei Zorka’s house was searched in Svislach. Flags and a Ukrainian tunic were at his home. The KGB reported that Zorka was in the “Azov” battalion in 2014 as a translator-journalist, but this information was not confirmed. Police took Andrei Zorka to the temporary detention facility on Okrestina. Siarhei Solovei was detained with him and accused of speaking against Lukashenka and Putin, anti-war position and urging Belarusians not to go against Ukraine. 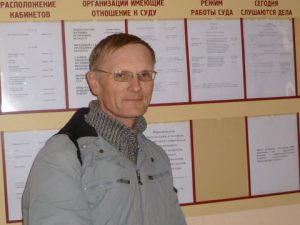 On March 4, journalist and bard Georgi Stankevich got detained in Bieshenkovichy district. Before that, police followed him all night, and in the morning, he was searched. Then they took his phone and computer. Shortly before his detention, Georgiy Stankevich said that the reason could be materials about the war in Ukraine on his website. On March 1, he published an appeal to the residents of the Bieshenkovichy district and the authorities. He called on them to contribute to the war end in every possible way.

On March 6, it became known about the detention of the activist Halina Lagatskaya in Minsk. She was arrested in the evening when Halina went to hang leaflets with the slogan “No to War”. The woman was taken to the temporary detention facility on Okrestsin Street. 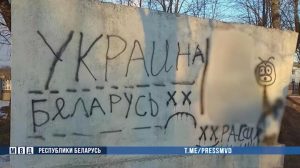 On March 8, two teenagers, 14 and 15 years old, were detained in Logoisk district of Minsk for graffiti about the war in Ukraine. They made an anti-war inscription on the village memorial to the dead during the Great Patriotic War. Under pressure, the teenagers admitted to the Interior Ministry that they were under the influence of videos on the Internet. Then they painted over the memorial with their own hands.

On March 10, 32-year-old Dzmitry Matyushenak got detained in Minsk. A poster “No war” on his balcony was considered a crime. Dzmitry was turned in to the law enforcers by his neighbour, who took a picture of the poster and reported it to the police department.

On March 14, Dokshytsy resident Siarhey Hrybovich got detained. The 53-year-old man got charged under Article 130 (incitement of racial, national, religious or other social hatred) and Article 361-3 of the Criminal Code (participation in an armed formation of armed conflict on the territory of a foreign state). Sergei got accused of going to fight in Ukraine.

On March 15, “repentant” videos with two underage girls, Homel College of Culinary Arts students, appeared on the web. In them, the girls apologized for publishing a video of military vehicles on TikTok social network and promised not to do so again.

On March 17, a man got detained in Brest. According to law enforcers, he registered in the Peramoha plan, offered his services to BYPOL and wanted to fight for Ukraine. The man had been previously convicted.

On March 17, Uladzimir Ryabchanka, a resident of Homel region, was detained for comments about law enforcers. According to the case materials, in “Belarusian, Ukrainian and Russian Telegram channels Vladimir insulted security officials and called for violence against their families”. Several criminal cases have reportedly been opened against the man.

On March 21, a 33-year-old resident of Pinsk got detained for sending photos of military equipment to opposition Telegram channels. Police convicted him under Part 1 of Article 361-4 of the Criminal Code (extremist activities promotion). The Ministry of Internal Affairs reported that the man “photographed military equipment with a mobile phone camera, filmed the movements of military vehicles and subsequently transmitted this information to the administrators of extremist channels”. 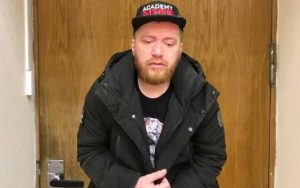 On March 22, state propaganda released a repentant video of Ivan Kovalevsky from Minsk. In the footage, the battered man said that he took part in the protests in 2020 and was going to fight in Ukraine against the Russian troops. Ivan got charged under Article 361-3 of the Criminal Code (participation on the territory of a foreign state in an armed formation of armed conflict, military actions, recruiting or preparing persons for such participation).

On March 22, 28-year-old Anna Pyshnik got detained in Mozyr. She got accused of “making a video of moving helicopters for an engaged destructive resource”. Police charged the girl under Article 361-4 of the Criminal Code (aiding an extremist formation). Now she is in pre-trial detention in Gomel. She has a minor child.

On March 28, MMA fighter Vladislav Novitski got detained in Minsk, who had advocated fair elections and opposed the war in Ukraine. A video with the athlete appeared on one of the pro-government Telegram channels. In it, Vladislav Novitskyy said that he had acquaintances who were now fighting in Ukraine against the Russian occupiers. It is not known what status the athlete is. 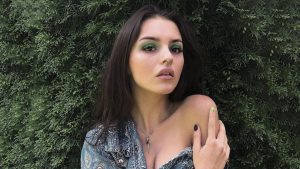 On March 30, a member of the scandalous movement Pussy Riot, Rita Flores, who had flown to the Belarusian capital four days earlier, was detained in Minsk. The law enforcers threatened to jail the girl for 15 years and ordered to record a penitential video and say that everything happening in Ukraine is correct and that the protests in Belarus are untrue. In case of refusal, Rita got promised physical violence. After recording the video, police photographed the girl in the background of the door with posters with the letter Z and then released. She got banned from entering Belarus for ten years.

On March 30, 32-year-old IT specialist Viktar Kulinka got detained in Homel. He got accused of transmitting a photo of a convoy of Russian equipment to the bot Telegram channel Belaruski Hayun. The law enforcers posted a repentant video of Viktor. He got also accused of being registered in the “Peramoha” plan proposed by the association of opposition-minded law enforcers BYPOL.

Ivan Yasnikov got also detained on March 30. He got initially accused of participating in the August 2020 protests. But during a search, police found military equipment photos on his phone, which he had uploaded to the Telegram channel “Kalinkovichi for Life” back on February 23. Ivan faces up to six years in prison. Now he is in the pre-trial detention facility in Gomel.

On March 31, Andrey Utkin, 30, an IT specialist from Homel, was detained. He got accused of photographing a convoy of Russian military equipment and sending it to the opposition Telegram channel “Belaruski Hayun”. A criminal case under Article 361-1 (participation in an extremist formation) and Article 361-4 of the Criminal Code (promotion of extremist activity) was filed against Andrei. Andrei Utkin is in the pre-trial detention centre.

On April 1, Oleg Borodin, 43, a resident of Gomel, was detained. In a repentant video, recorded under duress, he said that he had filmed a video of military equipment at the Gomel railway station and sent it to the chat-bot channel Belarus Brain. Oleg Borodin got accused of participation in an extremist formation and facilitation of extremist activity.

On April 5, a 49-year-old resident of Khoiniki, former teacher Iryna Abdukerina got detained at her dacha. In a repentant video, the law enforcers forced her to tell that she had filmed the movement of a column of Russian equipment and sent it to the Telegram channel “Belaruski Hayun”. By the way, the woman got fired from the school in 2020. Two criminal cases were filed against her for promoting extremist activity and participation in an extremist formation. Now Iryna is in pre-trial detention.

On April 8, Maksim Stasiuk was detained in Minsk and accused of wanting to fight for Ukraine. Pro-government Telegram channels reported that he had also participated in the 2020 protests. State propaganda published a “penitential” video of Maksym. It shows the guy in a depressed state, most likely after being beaten. He was crying and “asking forgiveness from Belarusians and Russians.

Belarusians have been constantly told on state television and in newspapers that the II World War was terrible, that we are peaceful people and must prevent the new war. But now, those who remind about it become victims of repression. And yet the Belarusians will not retreat – the whole world must know that we do not want war.