The demographic situation in the Belarusian village leaves much to be desired. People are in no hurry to start families there, not only because of low earnings but also because of the lack of prospects for children. Schools are closing, and there are almost no clubs and sections for children. And the guardianship services have increased attention to children from the village. In this article, we will tell you how rural children are deprived of their homes and relatives.

In 2015, the granddaughter of the Hero of the Soviet Union, Svetlana Lopukh, from the village of Chenki, Gomel region, lost her 4-year-old daughter Veronika. The girl was taken to an orphanage. Although, her mother worked as a cleaner and could provide for the child. It happened after the medical commission, at which Svetlana began to ask questions about the name of the longest river in the world. The woman has never consumed alcohol, has not been noticed in antisocial behaviour. Her whole “sin” was that she didn’t get an education and started working in adolescence – her grandparents raised her but died early. In the store where Svetlana worked as a salesman, they said: the woman could not distribute the money until the end of the month. According to the store’s administration, a salary of 250 rubles should have been enough for Svetlana and her daughter. At the time of the child’s removal, the granddaughter of the Hero of the Soviet Union received a salary less than the subsistence minimum. 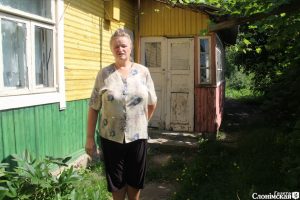 In 2017, the guardianship authorities took the children from Natalia Mikhno from Derechin, Zelva district. Natalia worked as a field breeder at the “Golynka” agricultural enterprise but didn’t get a salary – there were figures from 360 to 450 rubles (130-160 euro) in the pay sheet, and the villager did not receive anything in her hands. The authorities argued that the woman had a debt. Because Natalia did not receive a salary, she had nothing to pay for electricity, water and heating. The villager appealed for help to the district executive committee, the village council, to the management of the enterprise, but no one undertook to help her. 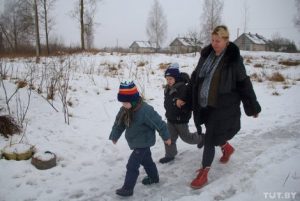 In 2018, the guardianship authorities visited the family of Olga Boytsova from the village of Bolshoe Kosho, Gorodok district. Olga raised four children alone. Her husband went to Russia to work and ended up in prison there, and the woman was left alone in the eighth month of pregnancy. The family was registered as being in a socially dangerous situation after the commission from the guardianship authorities saw dirty floors and laundry on ropes. Since then, checks have become frequent in the family. At first, they did not like the pile of bark near the stove, then – only half of the pot of borscht on the stove (the children managed to eat the other half), then there were questions about the woman’s pregnancy and the death of her fifth baby from meningitis. The check came to her even on the day of the child’s funeral. In November 2018, officials recognized the house as an emergency (although Olga had previously asked the authorities for help with repairs) and took the children to a shelter. Olga still has arrears for the rent of the house and electricity. Neighbours, the church, and trade unions gathered to help the woman – the children managed to win back.

In 2018, officials decided not to intercede for a young mother from the agricultural town of Obukhovo, Grodno region, a social orphan Svetlana Abramovich. According to the material in the state press, 20-year-old Svetlana was a victim of domestic violence – her husband and the father of her son Nikita beat her. Out of desperation, lack of money, the girl decided on a terrible act – suicide. Fortunately, she was saved, but little Nikita was taken away after this incident. Svetlana and her grandmother had to make a lot of efforts to take the child to themselves. Let’s note a few points. The girl, as an orphan, was not allocated housing for quite a long time. According to the law, this must be done upon reaching 18 years or as soon as she finishes her studies. The police did not detain Svetlana’s husband, who beat her – instead, they decided to take the child’s mother away from the victim of the abuser. After Nikita was taken away from the family, Svetlana was left without money. The government stopped paying both child benefits and orphan’s allowance to her. At the same time, the state preferred to accuse the young mother of unwillingness to take care of her son.

In 2019, 26-year-old Tatiana Kulaga from the village of Orlevo, Luban district, became a new victim of the guardianship authorities. The woman has five children, two of whom lived with their father, and two lived in a shelter. The state newspaper, which described the case, said: the mother drinks alcohol, and it is dangerous for children to be with her. However, the material of the propaganda media still got the truth. Tatiana worked at an agricultural enterprise that did not pay a salary and did not even transfer the prenatal allowance on time. As a result, Tatiana could not buy things at the maternity hospital and pay for firewood for heating. By the time the villager gave birth, she had found money to repair the house and buy necessary household items.

In 2019, the tragedy happened in the Voronovo district – 30-year-old Tatiana Bovshis from the village of Vaikuntsy committed suicide, leaving four children orphaned. She decided on such a desperate step when social services took her children to a shelter. The main reason was unsanitary conditions in the house. The family was registered back in 2014. Since that time, inspections have become more frequent. At the same time, the children studied well at school, and teachers characterized them only positively. But immediately after Tatiana’s death, the school principal described the family as critically unreliable in the “Voronovskaya Gazeta”. The children did not return to the family. Their father was obliged to pay 800 rubles a month for their maintenance, while the man’s salary did not exceed 400 rubles.

At about the same time, a similar tragedy occurred in the village of Buda in the Oktyabrsky district of the Gomel region. The 32-year-old woman has three minor sons. Before that, guardianship authorities regularly accused her of disorder in the house or lack of work. The building where the family lived was old, they had no money for repairs and the purchase of new housing – only the children’s father, Igor, worked in the family, who received $ 200 a month. Olga was afraid to leave her home and leave her sons alone for a long time. Guardianship authorities threatened that if she did not improve, they would take the children to a shelter. A few days before her suicide, Olga got a job as a milkmaid at a local farm and applied for better housing conditions. When the woman took her own life, the guardianship authorities again threatened her with a check. The Oktyabrsky district executive committee and the school where Olga’s older children studied refused to comment on the situation of suicide. 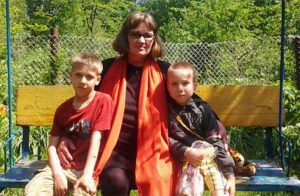 We have repeatedly written on our website about cases when mothers with many children living in villages became the centre of an attack by the guardianship authorities. In 2015, we told the story of Nadezhda Dudarenko from the Svetlogorsk district. There were seven adopted children under Nadezhda’s care. Five of them were taken away in 2012, and two more in 2015. It all started when Nadezhda opposed the parent-teacher of a family-type orphanage, who turned out to be a paedophile. To silence her, the district executive committee decided to take away five pupils from her. When her conviction was confirmed, the school director sold the apartment and moved to another area. But the foster children didn’t return home. Two more were taken from the family after they became victims of beatings at school. 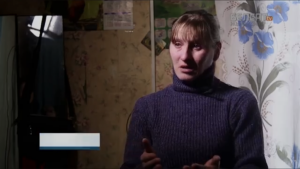 In 2018, we wrote about Olga Sushko from the Krupki district. A deputy district prosecutor appeared in Olga’s house and gave the woman a blank form to sign. And after that, commissions began to come, which inspected cabinets, refrigerator, linen, and then showed photos from the house to the district executive committee. A week later, the children were taken away. Sometime later, a text about the removal of children appeared in an empty form. Olga’s sons lived in an orphanage. The Prosecutor of the Krupki district, Dmitry Makarevich, said that his staff did not participate in the children withdrawal. Olga appealed to higher authorities – and after that, she got threatened with deprivation of parental rights. In addition, it was necessary to pay 410 rubles a month for the maintenance of children. Olga’s salary was only 350 rubles.

In 2019, we created monitoring, where we told the stories of children and parents separated by the guardianship authorities. Among the cases we have described, there were many stories about rural families. For example, in 2017, a commission consisting of teachers of the Derechin school and representatives of the Zelva council came to the mother of two children Ekaterina Gayevskaya. According to the members of the commission, they received an order to take her children away from her. When Ekaterina asked on what basis, she heard that she did not have enough firewood for the winter and the electrical wiring was not lined to the ceiling. In 2017, Valentina Buslaeva, a mother of five children from the agro-town of Zhilikhovo, Kopyl district, together with a new house from an agricultural enterprise, received a debt from previous tenants for utilities. In case of non-payment of the debt, Valentina got threatened to take away three minor children. It did not happen thanks to the “Our House” intervention. Our activists came to the meeting of the executive committee and prevented it. Local authorities began pressuring the woman, death threats were made for complaints and appeals to human rights defenders, and late in the evening on December 11, 2017, riot police broke into Valentina’s house and conducted a search. “Our House” managed to raise money to pay off arrears on utility bills. After that, the family was left alone, and the children returned home.

In 2017, four children were taken from a resident of the village of Tevli in the Kobrin district, Nelly Ditkovskaya, based on an oral certificate from a local precinct officer. The policeman informed the Commission on Juvenile Affairs that Nelly’s husband drinks alcohol, the house is dirty, and the plot is not cleaned. However, none of the facts got confirmed by the neighbours of the family. At work, Nelly and her spouse also refuted the words of the district police officer. The mother of four children is sure that her children were taken away because the authorities didn’t want to solve the housing issue. Nelly Ditkovskaya has been standing on improving housing conditions since 2010. The housing offered to a large family was not adapted to life: the roof was leaking, plaster was falling off the walls, it was necessary to conduct water independently.

In these cases, the most surprising thing is that Lukashenka has repeatedly asked women to give birth to three children – and especially the issue of demography is relevant in rural areas, whose population is gradually ageing and dying. And yet, it is the village children who are in danger. Their parents have less money, less chance of finding a job, and because of this, housing conditions are worse. The state is not going to help them – it is much easier to spend money on security forces, officials, ideological events that nobody needs to create the appearance of well-being. In such conditions, it is not necessary to think about why people leave Belarusian villages en masse, alas.