Marches with portraits of Lenin and Stalin, pioneer ties and propaganda speeches are a thing of the past. However, after more than 30 years, the Belarusian authorities decide to revive the traditions. Today, young Belarusians celebrate Pioneer Day, participate in Communist forums and march with portraits of Soviet leaders.

On 19 and 20 May, Belarussian schoolchildren were forced to celebrate the 100th anniversary of the pioneer movement. Pioneer organizations were established in the USSR in 1922. Similar ones existed in the countries of the socialist camp: Bulgaria, Romania, Poland, GDR, Czechoslovakia, countries of Asia and Africa with dictatorial regimes supported by the Soviet Union. Only Belarus, Venezuela, the Democratic People’s Republic of Korea, China, Laos and Cuba have pioneers now. In Ukraine, for example, the pioneer movement was banned in 2015. 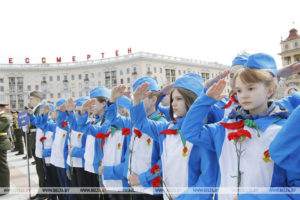 The Belarusian Republican Pioneer Organization has over half a million members. Modern pioneers no longer wear red ties, they wear red-green ones. Membership is voluntary: if parents don’t sign a relative document, their child cannot be forced to join pioneers. Those who have decided to join do volunteer work, hold concerts and campaigns and, of course, pay membership fees. An important part of the life of a modern Pioneer is participation in the regime’s propaganda activities and lectures about the war, the partisans and the “enemy” white-red-white flag.

This year’s the Pioneer Day did not go without remembrance of the victory over the German soldiers in 1945. Pioneer leaders and activists solemnly laid flowers at the Victory Monument. Then a pioneer flash mob, “Symbols of My Country”, took place in the State Flag Square in Minsk, of course, with Lukashenko’s red-and-green flag. At the exhibition centre BELEXPO the festival “Territory of Childhood” took place. It is noteworthy that girls in Soviet brown dresses with white aprons were in the photos. By the way, the officials did not miss the opportunity to say how important it is to be proud of the great deeds of the ancestors. 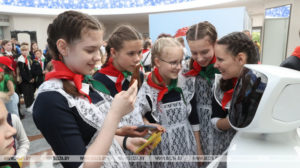 “Events like today are significant to help young people appreciate the heritage of previous generations. When you have received peace, freedom, independence, the opportunity to study and work as a fact of life, it is not quite as much appreciated as when you have overcome barriers and struggled to get there,” said Viktor Liskovich, chairman of the Standing Committee on Education, Science, Culture and Social Development of the National Assembly.

Also, on 20 May, the best pioneers from all over the country met with Lukashenka. The dictator told the pioneers about his childhood and the pioneer motto. And again, he started talking about the war – paradoxically not in line with the regime’s support of the Russian aggression: “A huge number – thousands – thousands of people of that time who performed not less heroic deeds, but no one knows about them. Heroes are alive as long as people talk about them, and their names are remembered. And God forbid * it should happen again. I think it is impossible that those years of war and what our people endured are repeated today or tomorrow. It is impossible. Because the time is completely different, and the wars are completely different. What happened then, on the territory of Belarus especially, the republic that suffered the most, will not be repeated today nor tomorrow”.

A similar experience was in the Third Reich, where the Hitler-Jugend organization existed, that people joined from the age of 10. Adolf Hitler spoke about this organization at the May Day festival in Berlin in 1937: “We started with young people first! We are raising a new kind of Germans!”. And Hitler also, like Lukashenko in 2021, banned all youth organizations except Hitler-Jugend. German youth were taught to obey the Führer and follow all his orders, boys had to be steadfast, and girls had to learn to be mothers.

Forum under portraits of Lenin and Stalin 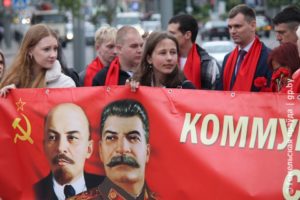 On 27 May, the I Forum of Patriotic Youth, which brought together over 100 participants, started in Gomel. It was organized by the Communist Party of Belarus and the League of Communist Youth. The forum programme included debates, live communication, and meetings with iconic personalities of the country. As the forum participants were older than the pioneers, they were spoken to more harshly and frankly.

Igor Karpenko, the Chairman of the Central Election Commission, remembered to the events of 2020: “There are certain aims behind political games. One can promise one thing but do completely the opposite. Behind high-sounding slogans, there should be a concrete social strategy, solving elementary tasks on which people’s well-being depends. Any election campaign causes social tension. It is impossible to do otherwise because it is a clash of political forces and certain opinions. We have all been through this. One should always think, not give in to emotions and assess the proposed programmes”.

A Member of the Standing Committee on Education, Culture and Science of the House of Representatives, the Chairman of the League of Communist Youth Sergei Klishevich urged to honour the memory of Lenin: “And in the preservation of traditions is our strength, our power. Our strength is also in facts, in historical justice. And today, historical truth requires us to stand up for it. We say that today is not an easy time, but believe me, it cannot be compared to the time when our grandfathers and great grandfathers gave their lives for the sake of a bright future for our state”.

The forum concluded with a peaceful rally and laying flowers to the monument to Vladimir Lenin in Gomel. Young people with portraits of Lenin and Stalin and posters praising the Communist Party of the Soviet Union were in the column of the demonstrators. An agreement to create cells of the League of Communist Youth all over the country was reached at the forum.

Soldiers from a young age 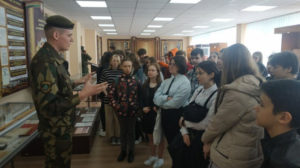 Preparation for war is nothing new for modern Belarusian schoolchildren. Instead of physical training, they march to patriotic songs and instead of excursions visit military units and police stations. On May 23, Minsk schoolchildren visited the Minsk military commandant’s office. There they were told about its history, the everyday life of servicemen, were shown military uniforms and weapons. The children had a chance to try themselves as snipers – they aimed weapons at targets under officers’ supervision. At the end of the tour, the schoolchildren saw a demonstration by the guard of honour. 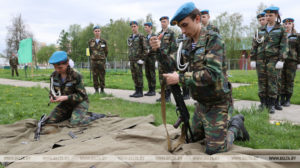 “Zarnitsa”, the game popular among Soviet schoolchildren, was in fact a military exercise. “Zarnitsa” was even turned into a plan to organize elementary military training in secondary schools due to the shortened military service period. Schoolchildren sometimes travelled to military units to participate in that game. Belarus has preserved the tradition of military exercises for children – in May, the “Orlyonok” game was held in the 103rd Vitebsk separate airborne guard brigade. Teenagers demonstrated skills in formation training, presented a creative demonstration and introduced the judges to their region and educational institution. Children also had to talk about their work on patriotic education and preserving the memory of war heroes. An intellectual contest and ‘relay race followed.

To prepare for such events, schoolchildren regularly visit military units. In Postavy, pupils of Secondary School No. 4 go to their lessons in the uniform of border guards every day, visit the frontier post every Saturday, and regularly go with their supervisors to other units. Sometimes they must spend nights in the barracks. Pupils of Vitebsk school No. 45 attend a military-patriotic elective and undergo combat and physical training in the 103rd separate Vitebsk Guards Airborne Brigade. 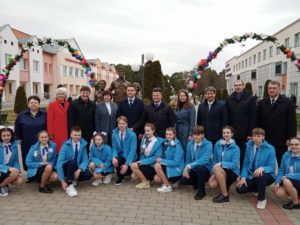 Every year children and teenagers from across the Soviet Union would gather at the Artek pioneer camp. A trip to Artek was always a reward for probably every Soviet child. Children raised with propaganda were happy to visit the place where their famous peers had a vacation – the pioneers, who often earned the right to a summer holiday there by slave labour on cotton plantations or farms. For children from poor families, remote villages, it was a miracle because life for schoolchildren in the countryside in the Soviet years was very hard.

Belarusian children also have their own Artek – the Zubrenok National Children’s Educational and Recreation Center in the Myadel District. Kids who have distinguished themselves in studies, sports and creative work are awarded a trip there. The centre also hosts republican youth meetings. This year in April, “Zubrenok” hosted the republican meeting of pioneers and the youth patriotic meeting. Education Minister Andrei Ivanets visited the youth patriotic gathering and said:

“Today, in our country, there are all conditions to ensure that every young person, no matter where he lives, can get a quality education, implement the acquired knowledge and skills. The head of the state has repeatedly emphasized that the youth is one of the most significant priorities of our country. Thanks to the support of our President, today each of you has an opportunity to plunge into the world of knowledge and implement your capabilities”.

However, the minister failed to mention the Presidential Decree No 18, thanks to which kids from well-off families end up in orphanages because their parents were involved in protests against Lukashenko. Nor did he talk about the thousands of children detained for drugs and sent to prison for 8, 10, 12 or more years. Not a word was said in his speech about the teenage political prisoners. He kept silent about kids brutally detained in 2020 and later  and bullied and tortured in prison.

The childhood of a modern Belarusian is filled with propaganda since kindergarten. Children are taught to be obedient and ready for self-sacrifice, not to ask inconvenient questions, obey the leader, i.e., Lukashenko. The dictator, fearing for his throne, cannot allow even children to be free. Yet we believe that absolutely every Belarusian child deserves freedom, justice, quality rest, and space for life and development without propaganda, just like their foreign peers.