Belarusian traditions were the first thing that the regime decided to attack. However, for some time Belarusians did not believe that it was possible to spot a protest against dictatorship in traditional national rites. Yet for the regime everything is a protest: from white-and-red clothes to round dances.

Three articles have already been published on the website of Our House about the events of the “Round Dance Case” in Brest. The events of September 13, 2020, resulted in one of the most high-profile protest cases of Belarus, following the presidential elections of August, 2020. People that suffered from arbitrariness of the regime, were then convicted and deprived of their freedom only because they could not agree with the fraud and expressed their outrage by dancing. We in Our House are confident that in history books of the New Democratic Belarus, the “Round Dance Case” will be paid the due attention to. Meanwhile, you can get acquainted with it here, at the pages of our website:

This is Revenge: 244 years of penal punishment for a peaceful round dance and songs in Belarus. 130 people have already been affected

They Ruin People’s Lives: Who Passed the Sentences on the “Round Dance Case” in Brest?

“Round Dance Case” in Brest, Belarus. They did not have mercy even for pensioners.

The rubric “Defence and Solidarity” of Our House’s website provides numerous materials on the repressions that Belarusians are subjected to for their active civic stance. In the sections “Monitorings” you can find analytical materials on the pressing issues of Belarusians inside the country and abroad.

Our House coincided the series about the “Round Dance Cases” to the traditional Belarus holiday of Kupalye. In that manner we wanted to emotionally support all Belarusians giving them an opportunity to perform a traditional round dance around the fire without the risk to be arrested by the so-called “law enforcers”. Even if it can happen not directly in Belarus for now.

Not only residents of Brest were brought to the defendant’s bench after a round dance. Today we present you two more round dance cases: one in Gomel and one in Mogileu. Pay attention to the dates of the events: December, 2021 and May, 2022. These dates prove that Belarusians did not give up, did not calm down, they are going to seek all opportunities to express their protest against the dictator and his regime.

FYI: a round dance is a dance of pagan origin: people dance in a circle in the honour of Yaryla, the Sun-God.

New Year round dances in Gomel 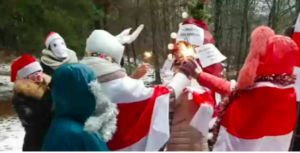 On December 25, 2021, about 10 residents of Gomel made a picnic in a forest. They dressed the New Year Tree, made a fire and danced a round dance. Some of the participants had white-red-white flags.

There were sheets of paper of the New Year Tree with the slogans: “Rat, go away!” and “New Year without the Rat!”. Two women were arrested.

On January 5, 2021 Ala Karalenka, a pensioner, was detained by the police. Her place was searched. The police seized her computer, discs, her phone and a white-red-white flag of Belarusian Social Democratic Party (Hramada). The pensioner was takein to a temporary detention facility for one night.

The trial took place on January, 6, 2021. Ala was sentenced to 7 days of arrest. The case was examined by the judge Andrei Lahunovich. 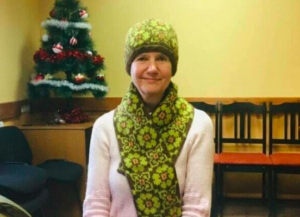 On January 6, 2021, another participant of the round dance in the forest was arrested – Alena Litvinava, a 57-year-old teacher. Her place was searched. She was accused of participation in an unsanctioned meeting in a forest. Alena was sentenced to 8 days of arrest. The case was examined by the judge Siarhei Karmanovich. 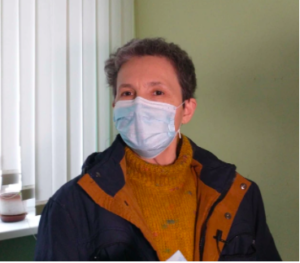 Ala Karalenka and Alena Litvinava were lucky to be sentenced only to 15 days of arrest in total. But many honest pensioners are behind bars for the long term – Our House has told about the oldest political prisoner in Belarus.

Pagan combat round dance in Mogilev. 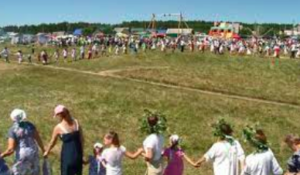 Round dance. A dance of pagan origin: people dance in a circle in the honour of Yaryla, the Sun-God.

On May 28, 2022, Belarusian, passionate about ancient rites, gathered in Mogilev, on the bank of Dnieper River for a “pagan combat round dance”, but they were disturbed by OMON (the riot police). 6 males and 14 females were detained.

One of the detainees was Volha Yeliseyeva, a 43-year-old mother of six children, awarded the Order of the Mother, a psychologist. She was kept in custody in the temporary detention facility for two days and fined in the amount of 10 basic units (320 Rubles = about 115.52 Euro), her phone was seized. 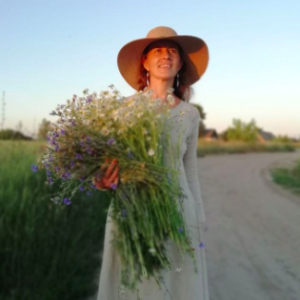 Both the “Round Dance” cases in Mogilev and Gomel ended not so horrible for the participants as they could have: the round dancers in Brest got convicted to significant terms of restriction of freedom in a prison-colony, in an open-type correctional institution (“khimiya”) or under home confinement (“domashnyaya khimiya”). Quite often Our House has to explain to our European colleagues what those types of punishment involve. We devoted a number of materials to that issue, e.g., “15 Working Hours a Day and Salary Below Minimal: How Political Prisoners Work and Earn at “Khimiya” (Open-Type Correctional Institution)”.

The regime destroyed a lot of lives, but it did not manage to destroy the will of Belarusians and their desire to live in a free country. That is why Our House and other human rights organizations continue their fights with their own methods: collecting and analysing the information, submitting our reports to international organizations. It is our duty to speak about what really is happening in Belarus, so that real criminals are brought to the defendant’s bench instead of honest and courageous Belarusians.