After the New Year holidays, the repressive flywheel restored work. On January 3, Stanislav Mochalov and Dmitry Grishchenko heard their verdict for participating in a protest on September 20, 2020. The men received three years in prison under Article 342 of the Criminal Code (organization and preparation of actions that grossly violate public order or active participation in them) and under Article 364 of the Criminal Code (violence or threat of violence against a police officer). 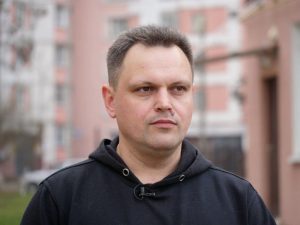 Stanislav Mochalov was detained on May 28, 2021. The 45-year-old Homel activist worked as a programmer. His apartment was searched and taken to the pre-trial detention centre. Before his detention, Stanislav managed to get a humanitarian visa to Poland but couldn’t leave Belarus. His 15-year-old daughter remained at large. 30-year-old Dmitry Grishchenko got detained on May 14, 2021, and before that, he worked for «Belorusneft» in Homel. Together with him, several other employees of «Belorusneft» got detained. Together with his colleagues, Dmitry recorded a request against violence. At the end of October 2020, Dmitry recorded for TUT.BY an appeal to colleagues and the leadership of «Belorusneft», where he condemned the repression and urged not to hush up the situation and openly declare his position. Two weeks before his arrest, his house got searched. He got suspected of insulting an official, but he got never charged under this article. On September 20, 2020, protests against Lukashenka took place in Homel. For the first time, riot police appeared in the city. And paddy wagons met demonstrators near the traditional gathering point. About a hundred of the bravest gathered near the Homel department store and walked towards Lenin Square when security forces drove up to them and blocked the way. Two security officers approached the procession at the corner of Sovetskaya Street and Pobedy Avenue and told them to go in the opposite direction from the centre. However, several people broke through the cordon, and several dozen demonstrators ran across the roadway to Sovetskaya Street. The group went out onto the road and blocked the traffic so that the others could join. An employee of the police information group with a megaphone fell to the ground and whistled but then got up.

Near the circus, the crowd met with the resistance of riot police. A scuffle broke out, and several protesters managed to escape. The remaining people stopped in Gromyko Square, began chanting slogans and singing “Pahonia” to Maxim Bogdanovich’s poems. When people began to disperse, spot detentions began.

Stanislav Mochalov and Dmitry Grishchenko were convicted for the events at this rally. Stanislav got accused of participating in mass riots, interfering with the movement of public transport and the work of public organizations on Sovetskaya Street. Dmitry Grishchenko heard accusations of organizing mass riots. According to the case materials, after breaking through the cordon of the security forces, Mochalov, in a group with Grishchenko and other people, deliberately walked onto the roadway at a forbidding traffic light signal. This action led to the disruption of transport and other public organizations. From 12.30 to 17.30, Stanislav and Dmitry “deliberately motivated by political enmity, not wanting to leave the place of an unauthorized mass event, feeling embittered towards police officers,” allegedly threatened the security forces with violence. The violence consisted of body pressure and hand restraint. Stanislav Mochalov also allegedly demonstrated an intention to attack a police officer during the performance of his official duties, “making threatening punches and kicks.”

The process began on December 15, 2021. The trial was in a small hall, and only four people could get in. The evidence was video recordings from the scene of the events, and there were no threats to the security forces on them. The charges under Article 364 were not dropped from the political prisoners. Both defendants pleaded not guilty under article 342. The witnesses were participants of the “Volnae panstva” chat, which Dmitry Grishchenko used, acquaintances of Dmitry and Stanislav. They spoke about their responsiveness, benevolence, calmness and sociability. In addition, during the examination of the evidence, it was clear that no one controlled the group of people, which moved chaotically and at their discretion. Riot police officers arbitrarily detained people and behaved quite aggressively while performing their duties. Stanislav Mochalov pleaded not guilty and refused to testify. But Dmitry Grishchenko said that on September 20, he, like many other people, came to a peaceful march to express his civic position. The people were inspired and cheerful, determined, but peaceful. The protesters did not interfere with the work of transport and shops, allowed people to pass during the march and crossed the road exclusively through a pedestrian crossing at a traffic light permitting signal. They also tried not to engage in confrontation with the police. Dmitry said riot police officers provoked the conflict because they did not allow dispersing and sent protesters towards danger.

The injured officers filed civil lawsuits against the accused for 600 and 2500 rubles for moral and physical harm. They testified to the court under fictitious names and got confused in their own stories. One of the witnesses, a riot police officer, said he did not remember the events of that day. And when the judge asked him to remember, he said that the participants of the march “kicked employees, knocked them down. They planned to be built in couplings and shouted: “punishers!”, and also urged not to obey the police and go forward.” According to the witness, this chain got controlled by Dmitry Grishchenko. The case materials also featured comments by Dmitry from the chat “Volnae panstva”. But the examination did not find any signs of extremism, calls for illegal actions, or incitement to hatred towards anyone.

On January 3, the final court session on the case of Stanislav Mochalov and Dmitry Grishchenko took place. The judge sentenced both to imprisonment in a general regime colony for three years. While the convicts are in pre-trial detention centre-3 in Homel. in conclusion, Stanislav began to have severe health problems: hypertension began against the background of stress, but they did not take medicines for him from his relatives. Stanislav asked to hand over English textbooks, but the administration did not accept, explaining that the library has everything you need.

We express our solidarity with our political prisoners and our confidence that Stanislav and Dmitry are not guilty of the crimes the illegitimate authorities accuse them of. For the dictator, this is just a labour force that will do dangerous work for free for three years. But we hope that this term for Homel residents will end much earlier. We hope that they, along with other political prisoners, will be released soon.