Until last summer it was possible to ride the two-wheeled iron horse in the country – there was even a large-scale carnival called “Viva Rovar” in its honour in spring. However, when large-scale bike rides of solidarity with opposition leaders began in Belarus, the bicycle became perhaps the most dangerous transport. On International Bicycle Day, we remember how the enforcers have been harassing fans of the vehicle for almost a year now. 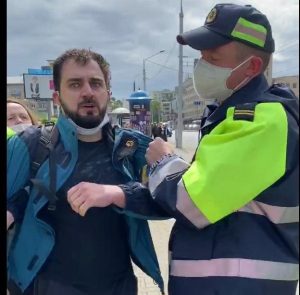 On May 31, 2020, after a picket to collect signatures for opposition candidates, cyclist Yevgeny Gormash was detained at the Komarovsky market in Minsk. At the same time, motorists were detained here, who honked in support of the applicants. According to eyewitnesses, the cyclist saw that people were being stopped and began to shout “Shame! Shame!” On the same day he was detained in the courtyard of his own house and taken to Akrestsina. According to the investigation, he was behaving inappropriately and using foul language. The court found Yevgeny guilty under three articles of the Code of Administrative Offenses of Belarus: 23.34 (violation of the procedure for organizing or holding mass events), 23.4 (disobeying a lawful order or demand of an official in the exercise of his official powers) and 17.1 (petty hooliganism). The fine was 1,350 rubles.[1] 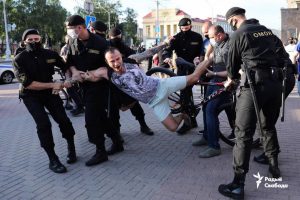 On June 19, Nikita Aniskovich drove up to Yakub Kolas Square, where pre-election pickets were being held. By that time, the square was cordoned off. A riot policeman told Nikita that it was impossible to get through. And after that, the guy felt that he was torn off the bike. In the police van, one riot police officer grabbed him by the neck and dragged him across the floor, while three others beat him. For a tattoo with Slavic symbols, Nikita was called a fascist. He was accused of participating in an unauthorized mass action and was fined 32 base units.[2]

In the summer, solidarity bike rides began in Minsk. On the evening of July 10, traffic police stopped several cyclists, allegedly for ringing bicycle bells. OMON officers arrived at the scene. Protocols were drawn up for several people and they were fined 1 basic unit. No one was detained.[3] The same picture was on several bike rides before. 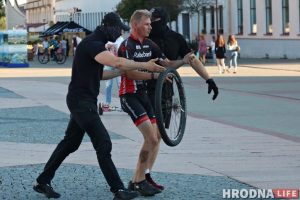 On July 15, five cyclists were detained in Grodno. Two of them were repairing their vehicles in the square. They managed to remove the wheel, and at that moment unknown persons in caps and masks approached them. Both were pushed into a minibus along with the bikes and taken to the police station. Later it became known that they were released by nightfall.[4]

On the same day in Minsk, on Independence Square, Alyaksandr Kuvshinov was detained. He came to file a complaint with the Central Election Commission, which refused to register as presidential candidates Viktor Babariko and Valery Tsepkalo. When the CEC closed, the man rode his bicycle home. Seeing that the OMON had blocked the pedestrian part, he drove up to the policemen and asked if it was possible to proceed straight. 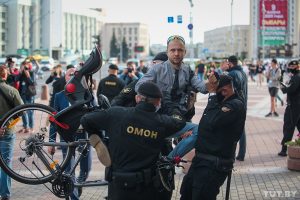 The riot commander gave the order to detain him – as a result, Alexander was taken to a police van along with his bicycle. When considering the materials of the case, it turned out that Alexander was detained on another street – the security officials were caught in a lie, because the photos with Alexander’s arrest spread all over the Internet. But this did not help – on July 17, the man was sentenced to 10 days of arrest.[5]

But on 7 August, there were violent detentions of cyclists during the cycle rally. Detentions began when the participants began to disperse. To clear the city of drivers of two-wheeled vehicles, riot police officers, police and soldiers of the internal troops were involved. One of the detainees was taken by ambulance straight out of the police van and another girl was taken to hospital with a broken arm after she fell off her bicycle when the enforcer grabbed it.[6] 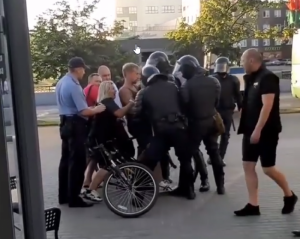 A dramatic story unfolded in Slutsk on August 9. A family with a child was riding their bicycles around the city when the security forces ran up to them. The man was thrown from the transport, his wife tried to intercede, the child was picked up by bystanders. The riot police did not even stop the screams of the frightened kid. According to the victim’s wife, the policemen were enraged by the white ribbon on his arm – the kind of ribbons used at polling stations to vote for Sviatlana Tsikhanouskaya. The man was released at night, without drawing up a protocol.[7]

On September 20, eyewitnesses managed to capture the arrest of a man on a bicycle at a pedestrian crossing near Victory Square in Minsk. The footage shows a man falling off his bicycle, a traffic policeman holding him on the pavement and then trying to drag him away from the crossing using force. A colleague and a security officer came to his aid.[8]

On September 27, a cyclist was severely detained in Lida. The riot police standing on the pavement saw a man riding a bicycle and rushed towards him. In surprise, he fell from the transport, and then began to run away. This did not help – the security forces caught up with him, threw him to the ground and then carried him into the minibus along with his bicycle.[9] 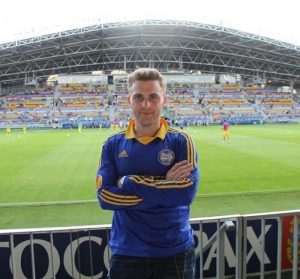 On October 16, Andrei Korolenya, one of those detained on August 7, was sentenced to two years in a general regime colony. On the day of the solidarity bike ride, he was harshly detained, his hands were twisted and handcuffed – the corresponding video is available on the Internet. According to the investigation, the man did not have mirrors on his bicycle and did not respond to the police’s demand to stop, and then inflicted bodily harm on the security forces, and even tried to strangle one of them. As a result, the court found the cyclist guilty of resisting police officers (part 2 of Article 363 of the Criminal Code).[10]

On October 18, the cyclist was detained in Grodno. Alexey and a friend were going to have a snack in a café. They were driving along the street of the Paris Commune, and at that moment a minibus of security officials appeared on the road. They got scared and turned into the courtyards, and after waiting, they decided to disperse in different directions. On Socialist Street, a police bus blocked Alexei’s way. They put him on his knees and carried him into the transport, they hit him several times and asked who he voted for in the elections, asked to show his phone. They did not start a case against him, but the guy still had a sediment, because the police broke his bicycle.[11]

On October 26, the cyclist was again detained. The man was driving through Yakub Kolas Square in Minsk and stopped at an intersection at a traffic light. Buses with security forces stopped near the Philharmonic Hall, and he decided to change the route. However, he failed to do this, he stopped, and at that moment the security forces jumped out of the arch and laid him on the ground. At the police station it turned out that the detainee had a head injury. He was taken to hospital. His trial took place under Article 23.34.[12] 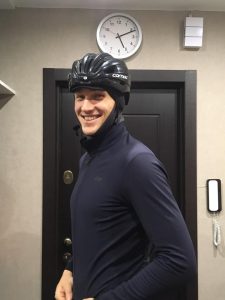 On December 27, 25-year-old Aleksey Adamovich was detained in Minsk. He was cycling home from a swimming competition. Soon, his wife received a call from the Moskovskiy District Department of Internal Affairs and was told that her husband had been detained. To the question “for what?” answered: “Well, he rode a bicycle in the city. Article 23.34, see what it is on the Internet. ” On December 28, a trial took place over Alexei – he said that he was just driving from work, without shouting any slogans. This was also captured by a defense witness who filmed the moment of detention. The version of the investigation turned out to be different – Aleksey shouted “Long live Belarus!”, and there were red and white ribbons on his transport. Moreover, such information was absent in the property inventory protocol. Alexey was sentenced to 10 days of arrest.[13]

The detentions continued in 2021. On March 25, 52-year-old cyclist Viktor Mikhailovsky was detained on Independence Avenue. According to the security officials, he was picketing “by placing a white-red-white-sticker of a three-headed dragon with the inscription” Tsmok-Zmagarych”. Judge Svetlana Cherepovich asked why the man was rolling around the city. Viktor was sentenced to 12 days of arrest.

On the same day, another cyclist, Sergei Baranchuk, was detained. The man stopped at a red traffic light and decided to take a photo of Independence Avenue. The police then approached him and detained him. At the police station, he was charged with disobeying police officers. And in court they were sentenced to 14 days of arrest.[14]

The warm season is on its way, which means that people will be switching back to their favourite means of transport. ICCI “Nash Dom” asks owners of two-wheeled horses to be careful. But we very much hope that soon it will be possible to ride a bicycle again without harm to health and psyche and without the danger of being severely detained.