The level of civilization of a society is determined by the attitude towards children, the elderly and animals. And if providing for children and the elderly (mostly war veterans) is part of Lukashenka’s propaganda machine, then the illegitimate state has never thought about animals. On the contrary, it resists the law on animal protection adoption, does not organize or finance shelters for homeless quadrupeds, and destroys unwanted dogs and cats in the most inhumane way. On World Animal Protection Day, the ICCI “Our House” launched a campaign dedicated to our younger brothers, as well as those who take care of them – animal rights activists who found themselves under repression after the elections. 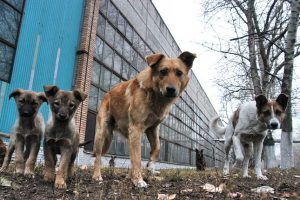 The number of homeless animals in the country is growing. Many Belarusians prefer not to sterilize their dogs and cats – more often because of the high cost of the operation. For example, in Minsk, the sterilization of a dog costs from 95 rubles (33 euro), the sterilization of a cat – more than 200 rubles (69,5 euro). The minimum wage in Belarus is 400 rubles (139 euro). The animal needs to buy food, toilet filler, a leash and a collar. To save money, Belarusians often feed pets with people’s food, and cats and dogs suffer from health problems. And kittens and puppies born are killed on their own, thrown into temporary detention facilities at a municipal enterprise or taken to the forest, and then – as luck would have it. 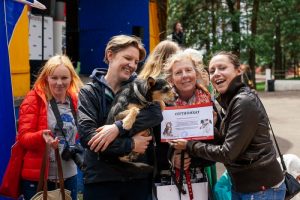 Someone is lucky – animal rights volunteers and just caring people save them. The abandoned animals get help and a new family. But the state does not allocate a penny for all this – the same Belarusians help animal rights activists: they give feed, medicines, fillers, diapers, toys to abandoned animals and take them to clinics for free. Veterinary hospitals provide discounts for the treatment of animals picked up on the street. But the trouble is that there are not enough volunteers for all abandoned cats and dogs in the country. After the 2020 elections, unfortunately, there were even more former pets on the street: their owners were imprisoned or forced to flee the country. And the pets got into the harsh conditions of temporary detention facilities – after all, there are no official state shelters in Belarus. 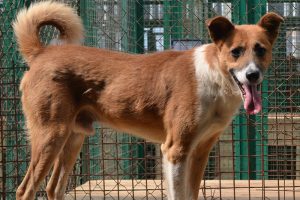 Temporary animal detention facilities are enterprises where neglected animals live. Municipal services visit the village or district of the city at the request of local authorities and immobilize dogs with the help of specific drugs. Then the animals are put in a car and brought to a temporary detention centre – but not all arrive alive. Many of them die on the way. Those who survived are kept in cramped cages, often on cold concrete, without walking, heating, without the ability to adapt to a person, get used to a leash. Dogs and cats sit in booths and aviaries for months. Wild, old and sick animals are put to sleep almost immediately. Kittens and puppies that are born in temporary detention facilities are almost always doomed to die. However, other animals also die unless a kind person takes them home. 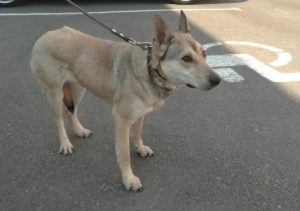 The dog Bertha was handed over to the temporary detention centre by the previous owners. For more than three months she sat there without getting out of the booth, from which she was dragged out with difficulty. To the overexposure, Bertha was trembling and trying to hide in the car, and she arrived at the temporary home in terrible stress. Because of this, Bertha’s fur was coming out in shreds. Only after a month, Bertha adopted to the leash, got used to kindness and warmth. Now Bertha is in the family – but she is still very much afraid of strangers. 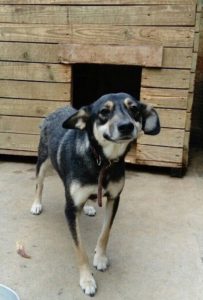 Bambi was tied with a tape measure to a fence near the capital’s temporary detention centre. We are unlikely to know who did it, but he wanted the faithful dog not to chase after him. Bambi became a guest of one of the aviaries. She spent more than a week here – and all this time did not eat and leave the booth. When the volunteers came to pick her up, Bambi resisted, growled, did not want to go out and clacked her teeth. As if she knew: if they take you out of the booth, it means a one-way trip. The consequences of the temporary detention facility affected the dog’s health: inflamed ears, gastroenteritis. On the temporary home, Bambi became kind and affectionate. The owners loved her so much that they decided to keep her.

Martin ended up in a temporary detention centre with a broken paw – such animals do not stay here for long. He understood this and looked at the photo from the aviary with sad eyes as if preparing for imminent death. But the dog was lucky – volunteers noticed him and took him for overexposure. In addition to problems with the paw, Martin had enteritis and parvovirus. The volunteers repaired the dog’s paw and restored his faith in people and goodness. Now Martin is still waiting for a loving family. 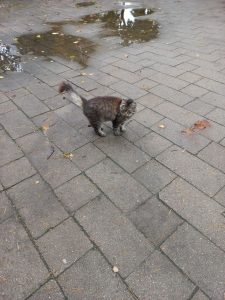 The animals that get to the volunteers are the real lucky ones. Many of their brethren remain in landfills, abandoned buildings, garages. Street animals are perhaps the most disenfranchised residents of Belarus. In the warm season, they can still catch a bird or a mouse, and in the cold season, they have to rely only on the belongings of garbage containers and what kind people will give. Dogs and cats also have nowhere to hide from the cold – public utilities are actively bricking up the basements of multi-storey buildings, and residents of entrances do not let animals warm up. The poor devils have to hide under cars, climb under the hoods, which, of course, no one checks in the morning. We can only guess what will happen to a cat who spends the whole day in the car.

Every day, street animals have to fight for their lives and survive. They become the object of bullying by schoolchildren, drunk, mentally ill, just people who need to take out their anger on someone who is weaker and cannot respond. In 2017, a 12-year-old schoolboy from Gomel, resting in a sanatorium, brutally killed a cat. We still don’t know how the teenager, who did not even repent of what he had done, was punished. In the same year in Polotsk, a policeman kicked a kitten on the street – a man was punished with dismissal from the internal affairs bodies. In 2019, in the Voronovo district, a 61-year-old man killed a dog that strangled a chicken on his farmstead. When he dragged the corpse to the trash can, an underage girl saw it. The child’s father, shocked by her story, turned to the police. In the same year, in Orsha and Baranovichi, skinners gouged out the eyes of stray dogs, and in Grodno, a resident broke a dog’s paw and left it to die in a field. We have found nothing about the punishment for these crimes.

In June 2020, a villager from the Lyuban district, out of jealousy, hanged two dogs of his friend – the police opened a criminal case against him. In February 2021, a video from Novogrudok appeared on the Internet, in which a 4-year-old child pushed, kicked and trampled a domestic cat. At some point, the boy hung the animal on a leash, then began to throw it over the handrail of the stairs, and it swung like a pendulum. Animal rights activists appealed to the police and took the cat away. The worst thing is that the boy’s grandmother said that the child had done nothing wrong. The family appeared under the control of the Juvenile Affairs Inspectorate. In August 2021, the Minsk resident saw a stray cat on the hood of his car and threw the animal to the ground. The cat died on the spot. The police opened a criminal case against the Minsk resident under Article 339-1 of the Criminal Code (cruelty to animals). The penalty under this article ranges from a fine to 3 years in prison, but the man got sentenced to only three months of arrest.

These are just a few cases of animal cruelty in Belarus. Animal rights activists believe that the term for animal murder should increase to at least five years. By the way, in the USA, for the death of a cat or dog, you can get ten years in prison, Poland – a fine and five years in prison. In Austria, the authorities can take the animal away from the owner for abuse. In Germany, the owner of a dog or cat can receive a fine of 25 thousand euros just for throwing the animal out into the street, and in Italy, they even put him in jail for this.

And now let’s remember what prison terms Belarusians get for protests and for killing animals. 18-year-old Sofia Malashevich got a sentence for two years in prison for painted riot shields. Journalists Ekaterina Andreeva and Daria Chultsova, streaming from the Roman Bondarenko memorial action, will also spend two years in jail. Mia Mitkevich received three years in prison for messages against the police officer on social networks. Yevgeny Barovsky stood up for a Minsk resident beaten by riot police and got four years in a penal colony. Denis Syrets from Molodechno, who wrote comments in a Telegram chat about Lydia Yermoshina and two police officers, was sentenced for the same period. A member of Viktar Babaryka’s initiative group, Sergei Kapanets, was sentenced to 5.5 years in prison for distributing opposition leaflets and transmitting information about the whereabouts of security forces on August 9-13, 2020 to the opposition Telegram channels. Vladimir Gorokh was detained on suspicion of preparing mass riots in Korelichi and Novogrudok after the presidential elections and insulting Lukashenka in chat rooms. For this, he got seven years in prison.

None of those who killed the animal got such terms. No one forced the knackers to confess to what they had done on camera, insulted them in the state media and on channels supervised by Lukashenka, did not threaten their relatives and friends. Nobody tortured the knackers, searched their houses and used violence. They are almost always detained without the participation of riot police.

Many psychologists say that lovers of offending animals may one day spread to people. More than 90% of serial killers and maniacs showed sadistic tendencies towards their younger brothers in childhood. In 1963, New Zealand forensic psychiatrist John McDonald formulated three signs of a future murderer. One of them is animal cruelty. There are examples: the Soviet paedophile Anatoly Slivko, who killed at least seven children, raised rabbits as a child and then killed them in sophisticated ways. An American serial killer nicknamed the Boston Strangler as a child locked dogs in cardboard boxes and then shot them through with an arrow. The Bitsevsky maniac stuck sticks into the birds’ heads. The knackers are much more dangerous – but not for the Lukashenka regime.

The illegitimate dictator believes that people, who write comments in opposition chats, wear white and red clothes and do not swear to him in love, are the most dangerous. That is why journalists of independent media, students who wanted changes, those who came out to defend their voices and rebuffed the punishers are being punished and tortured much more. That is why state shelters will never appear in Belarus under Lukashenka – it is much better to use money from the budget for a new uniform for security forces. And Belarus will remain the country with the worst attitude to animals in Europe. We must change the course of events not only for our sake but also for the sake of dogs and cats – they, like us, have the right to live in a free Belarus.