Perhaps the most active groups in the Belarusian segment of Facebook are animal protection groups. There is not many of them, but they show how much help animals need in all regions. And at the same time, you can understand how Belarusians treat our little brothers, why they throw them out and what the illegitimate state does not do for cats and dogs. We looked into one of these groups. Outdoor animals are in dire straits, especially in the cold. It is doubly difficult for former pets to survive. Very often, they are abused by other dogs, cats and people. It is impossible to get into the cellar and hide – the housing and utility boards prevent cats from getting into the basement by mass concrete coating the windows, which is against the law. House cats find it more difficult to feed themselves because they have never caught mice and birds or fought over a piece of sausage thrown into the rubbish bin. We can only hope that kind people feed the cats. There are hundreds of such unfortunates in every district centre. But only a few are lucky. Some run wild and hide from people. Others are killed in fights for food or die under the wheels of a car. 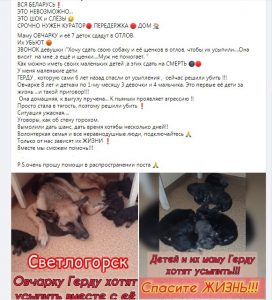 We’ve already told you that one of the reasons animals end up on the streets is unwanted pregnancies. Owners don’t want their pets spayed (or don’t have the money to do so), and as a result, dogs give birth to puppies, and cats give birth to kittens. The “offspring” end up on the street – sometimes together with the mother. Less often, Belarusians turn to dog protectors with the request to help in sheltering their animals. It is much easier for ordinary people to kill their pets and their “offspring” or send them to captivity, where puppies and kittens die in the first few days, and adults are put to sleep or sent to vivariums for experiments. We wrote about this in a previous article about experiments on animals. 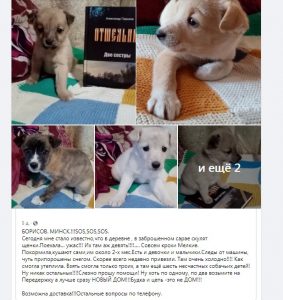 And here is a post that illustrates how the Belarusians get rid of unwanted offspring. They take them far away from the city and throw them away in an abandoned barn. The calculation is that people won’t find them, and the animals will die on their own from hunger and cold. This post is about nine puppies found far away from populated areas. Tread marks, already covered with snow, were found near the barn. Volunteers managed to pick up three little ones, feed the others and insulate the room where the puppies were sitting. 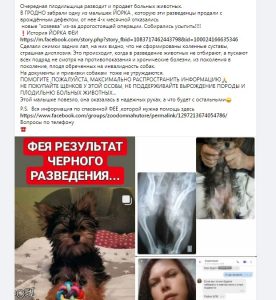 Another category of posts in animal protection groups is information about breeding animals. Professional breeders in Belarus have long been seriously engaged in selling puppies and kittens of elite breeds. They read a lot of specific literature, undergo training and consultations. And they also closely monitor the health of the mother and her babies, provide quality veterinary care, elite food, gentle care and strict selection of future owners. But to buy a puppy or kitten from a breeder is very expensive, so Belarusians, wishing to be owners of an elite breed, resort to the services of illegal breeders – those who stamp puppies and kittens. They do not care about animals’ health, producing as many little ones as possible per year. They starve them to death, not to mention seeing a vet or groomer. They sell the pets for little money and often with abnormalities. The baby in this post was born to breeders. She has dysplasia of the hind legs – they are just not formed. Owners were not informed that the Yorkshire Terrier had the abnormality. When the owners found out about the disease, they threw the dog out on the street. The puppy was lucky to be in the hands of volunteers who would make his life better. But many more dogs and cats are dying of numerous diseases. 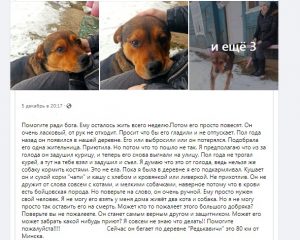 The Belarusians want to get rid of annoying animals in every possible way. We have seen posts about animals can be killed by their owners. The reasons are various, and one of them is attacks on other pets: chickens or goats. The dog in this post has lived with a village resident for six months. All this time, he has not touched the poultry. But one day, he caught a chicken and ate it. The volunteers understood that the dog was hungry because its owner had been feeding him tubular bones that were dangerous for animals. The dog was so hungry that he ate everything from dry food to bread. Despite the disgusting treatment, the animal had not lost its faith in humans and gladly accepted affection. However, its “mistress” was unhappy with it and decided to hang it up. Volunteers rescued the dog and found a shelter for it. 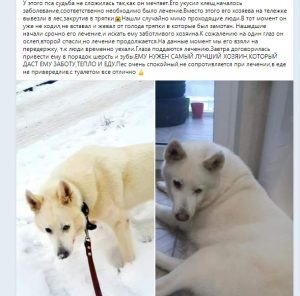 Another reason why Belarussian dogs and cats end up on the streets is sickness. Treatment at a veterinary clinic costs an unaffordable amount of money. Volunteers have to open a collection to complete surgery on a stray animal, and no one will help the owners. If they don’t want to spend money on expensive treatment, they get rid of dogs and cats, leave them in vet surgeries, move to the woods or dump in veterinary clinics. The dog in this post was in the woods on a trolley under rags. The dog could not stand up on its own and was chewing rags from hunger. Random passers found him and decided to treat him. Unfortunately, one eye is blind, but the other can see fine. Volunteers want to find him a new family, where he will be given a lot of time and attention. 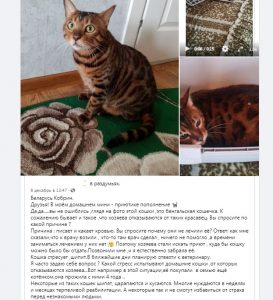 The Bengal cat from Kobrin, the subject of this post, has also been left untreated. When her owners noticed blood in her urine and faeces, they took her to the vet. However, according to the owners, the treatment prescribed by the vet did not help, and they did not have time to look for a new specialist (and treat the cat in general). Therefore, the owners started looking for a shelter for the cat. When volunteers took the cat away, it reacted to the change with extreme stress and started hissing at people. The animal is known to have spent four years with its traitor family. 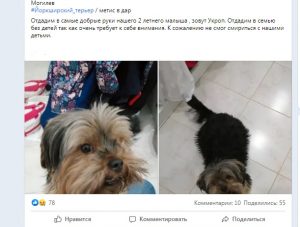 Some animals end up in the streets because their owners do not want to raise them, especially dogs. If you need a dog handler in the capital of Belarus, it costs 10-60 rubles for a session, or you can find one in the countryside for as little as 5 rubles. However, there’s no guarantee the dog handler will be able to handle your pet’s behaviour. After seeing some professionals, the situation gets worse. The dog becomes aggressive, his psyche gets disturbed, and the money is wasted. That is why families prefer not to train their dogs (or do it themselves: shouting, beating). And when an animal’s character only gets worse, they get rid of it. The Yorkshire terrier in this post was aggressive towards children. The owners did not correct the dog’s behaviour and gave the dog to volunteers. But the solution to the problem could have been simple: asking a dog handler. 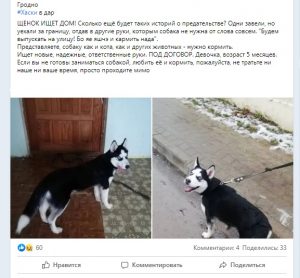 Not only mongrels become abandoned – even pedigree dogs, bought for large sums of money, are abandoned. One of the many examples is the Husky in this post. The dog was not taken abroad – which, in general, is not an uncommon problem nowadays. Often, running away has to be done in a hurry. There is no time to fuss with the chip and vaccinations and place the animal in other hands. Belarusians, for various reasons, don’t think about doing it in advance. The Husky managed to find a temporary family. However, the new owners were not burning with the desire to feed and educate a rather complicated animal, so they preferred to send her to the street. The 5-month old puppy was picked up by volunteers, who went in search of a good family for him. 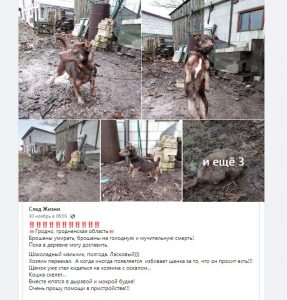 The abandonment of animals in the villages is another long-standing pain of animal welfare workers. The owners take a dog or a cat in the summer and leave them in the countryside when the weather turns cold, never coming to feed them. The 6-month old puppy lives in a shack in Grodno and lives in a hole-in-the-wall wet hut together with a hungry cat. According to concerned residents of the same village, the owner sometimes comes to the house but does not feed the animals, beating them up when they ask for food. The dog has already started barking at the owner. Thanks to social media, people were willing to adopt the puppy and the cat. Now both are doing well. 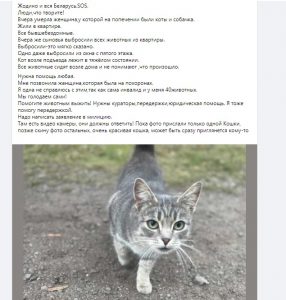 Many animals’ lives change when their owners die. It so happens that the animals, who have lived in love and care, end up in the hands of the deceased’s relatives. Or even end up on the street. This pet belonged to a woman who died unexpectedly. She rescued several cats and a dog and sheltered them in her flat. After her death, her sons came along and didn’t like their mother’s animals. They decided to get radically rid of them by throwing them out the window from the fifth floor. After such a “flight”, the cat was lying heavily under the staircase. The other animals were sitting under the staircase door in terror and shock, not understanding what had happened. The custody of the dogs and cats was taken over by a disabled woman who had 40 animals in her care. 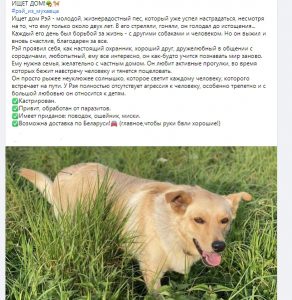 What awaits animals who have become homeless on the streets? Dogs and cats suffer from hunger, cold, violence, cruelty, and they need to hide. Thousands of them go through torture year after year. It is comparable to the pre-trial detention centre and temporary detention centre. Ray, the dog from this post, has been shot at, chased, starved to exhaustion, but he has not lost faith in people and has remained kind, affectionate and curious. At the same time, he proved himself to be a guardian and a great friend for the whole family, especially the children. He has also proven to be friendly with his kin. But without volunteers, this wonderful dog could not have survived. And animal welfare volunteers are often people with jobs, their animals and dozens of pets. 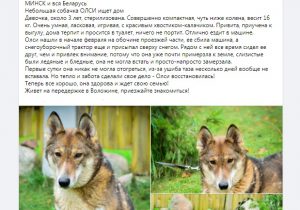 Olsie, three years old dog, was hit by a car. A snowplough tractor also covered her with snow. Olsie was lucky because her four-legged friend was sitting next to her at all times. The dog got people’s attention – and just in time, because Olsie was already almost frozen to the ground, her mucous membranes were icy and pale, and she couldn’t get up. For the first twenty-four hours at the shelter, Olsie was shivering from the cold. She had a bruised pelvis, which had kept her awake for days. Volunteers did their best to help the animal recover: she was spayed, treated and fed. And now Olsie is ready to find a new home.

The animals we told you about were lucky to be spotted by humans. They got rescued from the web of deadly danger in time. Facebook users found out about them and found a warm home. But how many poor souls in Belarus die alone in the woods, abandoned barns, villages on chains? It is impossible to end this as long as the security forces torture ordinary people. But we believe that in democratic Belarus, a law on animal protection will appear. And every year, there will be fewer unhappy hearts dying of hunger, cold and human cruelty.