Olga Karach, head of the ICCI “Our House”, was one of the first to raise the topic of the struggle against Lukashenka’s regime at the Second Forum of Democratic Forces. Undoubtedly, all participants of the Forum are aimed precisely at defeating the regime, but often not all are able to highlight the rational grain, point out the mistakes, take into account the experience and focus on the most important things.

In this piece in Our House, we present the text of Olga Karach’s speech at the Forum, which was held in Berlin on July 11-12, 2022. You can already read about the first results of the Forum on the Our House website by clicking here.

Olga Karach: “I call on everyone to unite and fight for Belarus!”

Today I will say that our struggle can be successful if we are aware of the reality in which we find ourselves today. There are very important strategic points on which we must base our struggle. And as I see it, not everyone is ready to tell themselves this, because the defensive reactions of our psyche sometimes work in a way that makes it hard to recognize reality. 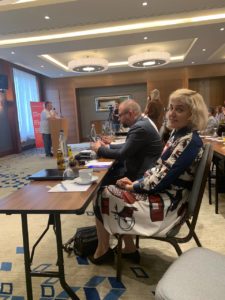 So, the first important point is that we all have to admit that the Kremlin is the main architect of the Belarusian dictatorship and that it is the Kremlin that sponsors and supports all wars and aggressive attacks on neighbors and not only neighbors. It is extremely important because today our struggle must outgrow and reformulate from a struggle for human rights into a national liberation struggle.

The second very important point: the victory in Ukraine is impossible without a victory in Belarus. As long as there are Russian occupation troops in Belarus, as long as the puppet dictator Alexander Lukashenka sits in Belarus, Belarus continues to be a threat to Ukraine and its security, and to its neighbors: Lithuania, Latvia and Poland. Belarus today is an occupied territory.

Opinion of Olga Karach on the occupation of Belarus which she voiced at the First Forum of Democratic Forces, you can read at the link on the Our House web-site.

I believe that all torture, rape in prisons of peaceful citizens, genocide of citizens, destruction of Belarusian culture and Belarusian language – all this should be included in the case at the Hague Criminal Court and should be added to the case of Ukraine, exactly as the crimes of Russia, which were made possible by the puppet regimes in Belarus and other countries. 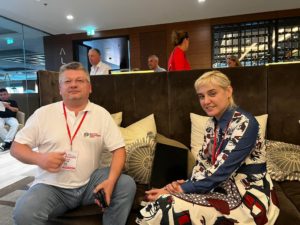 You know that there is now an active phase of the war in Ukraine, and everyone only talks about the active phase of the war in Ukraine. But notice who is now actively saying that the war began in 2014! Ukraine is speaking. And this should be heard by the whole world, it should sound stronger and much bigger. Equally, what happened in Belarus in 2020-2022 and how the Belarusan regime, with the help of the Kremlin, destroyed the Belarusan protest and destroyed the peaceful Belarusan people.

I think it is very important for us to announce the processes of de-Sovietization, de-communization and also to show the maximum connection of the criminal group of Lukashenko with the historical “teachers” from the “NKVD” and Stalin’s regime. Many of us have been through torture, many of us have been through terrible stories. But all this torture is not just for fun – all this torture is taken from the history of the “NKVD”, the “KGB”, worked out on people from the Soviet watch. Therefore, de-Sovietization, de-communization today is a very important process for the entire democratic movement.

In addition, I want to remind that since March 1, 2022, our organization in coalition with other organizations is conducting a “NO Means NO” campaign. This campaign is aimed to help young conscripts from Belarus to avoid participation in the war on the side of Vladimir Putin and to avoid mobilization to the army. And today we desperately need the help of our European and Ukrainian partners.

You can read the materials of the “No Means no” campaign on the website of Our House at the following link.

I want to remind you that the Defense Ministry of Belarus sent out 43,000 notices to young draftees in February 2022. Lukashenka managed to enlist only 6,000 people into the army by means of intimidation and manipulation, 13,000 were able to “escape” by some clever tricks and 20,000 are on the run. These people are now stuck in Turkey and Georgia. They cannot get into the territory of the European Union – they are refused, because these countries are allegedly safe for the Belarusians, but it is absolutely not so. And we need to build humanitarian corridors for young conscientious objectors, so that, young guys who receive a summons to the Belarusian army, which can go to the territory of Ukraine to fight on Putin’s side, can avoid it. So that we block any risks and any potential participation of Belarusians on Putin’s side in Ukraine.

Besides, it is important for us to understand that it is impossible to come to an agreement with Vladimir Putin. Unfortunately, there is a war of annihilation going on – either we or he. Therefore, we need a new security architecture in our region, which would also include the Belarusian protest movement! And in particular, and – I insist on it – Belarusian women, who have shown themselves as nobody else in the protest. I think that the Belarusian experience, the experience of Belarusian women who went through prisons, torture and persecution, did not break down and continue to struggle, is very important in this situation.

You know, a lot has happened in two years. We all went through depressions, through disappointments, to some extent we think we were betrayed and someone did something wrong, someone didn’t do something, or didn’t do enough, or did the wrong thing…

But you are the future political elite at this forum today, the force that will determine the country’s political course. Therefore, it is up to all of us to decide where Belarus will be – with the West or with the East, whether it will be part of the “Russian world” or part of the “European world”. And most importantly, whether it will be at all, as a country. That’s why the question of our independence is particularly acute today.

I urge everyone to unite and fight for Belarus. Because we came out and took part in the protests of 2020, because we all had one big dream of a common big house, where there would be room for everyone! Where everyone will be comfortable and where we will do a general cleaning, kick out all the rats and cockroaches and live as a happy, free and rich nation. Long Live Belarus!