On July 11-12, the II Forum of the Belarus Democratic Forces was held in Berlin. This time more than 170 participants registered, and about a hundred were present offline. It is worth noting the fact that the second forum on the Ukrainian side included representatives of both official authorities and business. This fact shows that Ukrainians understand the difference between a dictatorial regime and Belarusians who represent a democratic community.

As is customary, the Forum began with an address to the people of Belarus and the participants of the Forum by the Chairman of the XIIIth Supreme Soviet of Belarus, Academician Semyon Sharetsky.

You can find the programme for the Second Democracy Forum. A recording of the online broadcast and individual speeches by the participants can be found on the YouTube channel of the Forum.

As always, Olga Karach, Head of the ICСI “Our House”, made a very bright, memorable and topical presentation in the first section of the Forum. You will be able to read the speech very soon on our website and view it in our Telegram channel.

One of the final documents was the “Declaration on the Recognition of Citizen A.G. Lukashenka as a Terrorist: “We, representatives of political parties, organizations, movements and initiatives, representing citizens of the Republic of Belarus, a co-founder of the United Nations, participants in the “Forum of Democratic Forces of Belarus”, representing the people of Belarus, on the basis of the existing facts of crimes against civilians of the Republic of Belarus, systematic and growing violations of human rights, a growing threat to international security, complicity in aggression against the independent and sovereign state of Ukraine, and also, on the basis of blackmailing the use of weapons of mass destruction against European states, we consider it necessary to adopt a declaration, according to which citizen Lukashenko A.G. is recognized as an international terrorist, and his regime as a terrorist organization”.

You can read the full text of the declaration here. 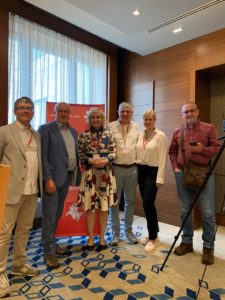 We would like to remind you that Olga Karach is on the list of terrorists according to the Lukashenka’s regime, but all Belarusians have long considered only one citizen – Lukashenka – a terrorist. And this is what the Forum wants to tell the world community once again!

This time the Forum has attracted the interest of many media outlets. The reason for this was Vadim Prokopyev’s unorthodox proposal, which has been discussed on many channels and chat rooms for two days now. According to some Forum participants, the proposal was purely populist in nature, but in the end it created additional interest in the Forum itself and its work.

The II Forum of Democratic Forces has come to an end, but the work of the Forum participants continues. It is impossible to discuss all the urgent problems and answer all the questions within two days. But the Forum itself is not an event which lasts for two days. Its work is going on constantly, dozens of people are involved in it, and we can feel its results even today. For example, Alexei Frantskevich, a representative of the Forum in Ukraine, has already received an enormous support from the official Ukrainian authorities and is effectively solving the problems of the Belarusians in incredibly difficult military conditions. Participants of the Forum are sure that the very fact of real association of many representatives of democratic forces will bring many more real and exceptionally positive results.