You may not be aware that there is one invisible group of people in Lithuania who are in a very poor financial situation due to the peculiarities of Lithuanian legislation. These are Belarusians who fled from Belarussian political repression and applied for political asylum in Lithuania. And so, while their case is pending, which can last up to 10 months, there is a work ban. That is, for six months or more, someone who has applied for asylum in Lithuania is not allowed to work.

During this time, it is supposed to feed on the holy spirit, but not everyone is able to do so.

While Belarusian men or Belarusian women, as well as their children, are waiting for a decision of Lithuanian migration, they still want to eat.

And in this sense, there is no one even to take an example from, because even Jesus only fasted for 40 days, not for half a year and certainly not for 10 months.

And here the Lithuanian organization Maisto bankas comes to the aid of refugee Belarusians, which, through the Belarusian human rights organization Our House, i.e. through us, organized distribution of free food for Belarusian refugees. Both those who are still waiting for their decision and those who have already got it, but still, especially in winter, need support and encouragement.

In 2022 we jointly with the Maisto bankas distributed more than 13 tons of free food to Belarusians. Our House, together with the protesting Belarusians, is very grateful that Maisto bankas does not charge us for this, thereby providing an opportunity to feed the needy Belarusians.

Maisto bankas saves food, we save Belarusians, everyone is well – everyone, except the Belarusian propaganda: the last one jealously watches it all and makes occasional scathing comments on our food in social networks.

In fact, rumors have it that once upon a time Thursday was a fish day.

Today, for progressive Belarusians in Vilnius who are trying to integrate in Lithuania, the «fish» days are back. Many ones have a huge catch on Thursdays. And it’s not always fish…

We’ve decided to come a sneak peek at the dishes Belarusian refugee women in Lithuania make from the products they receive from Maisto bankas through Our House.

To keep the bright colors of this winter alive, Our House decided to run this Thursday’s dish contest. 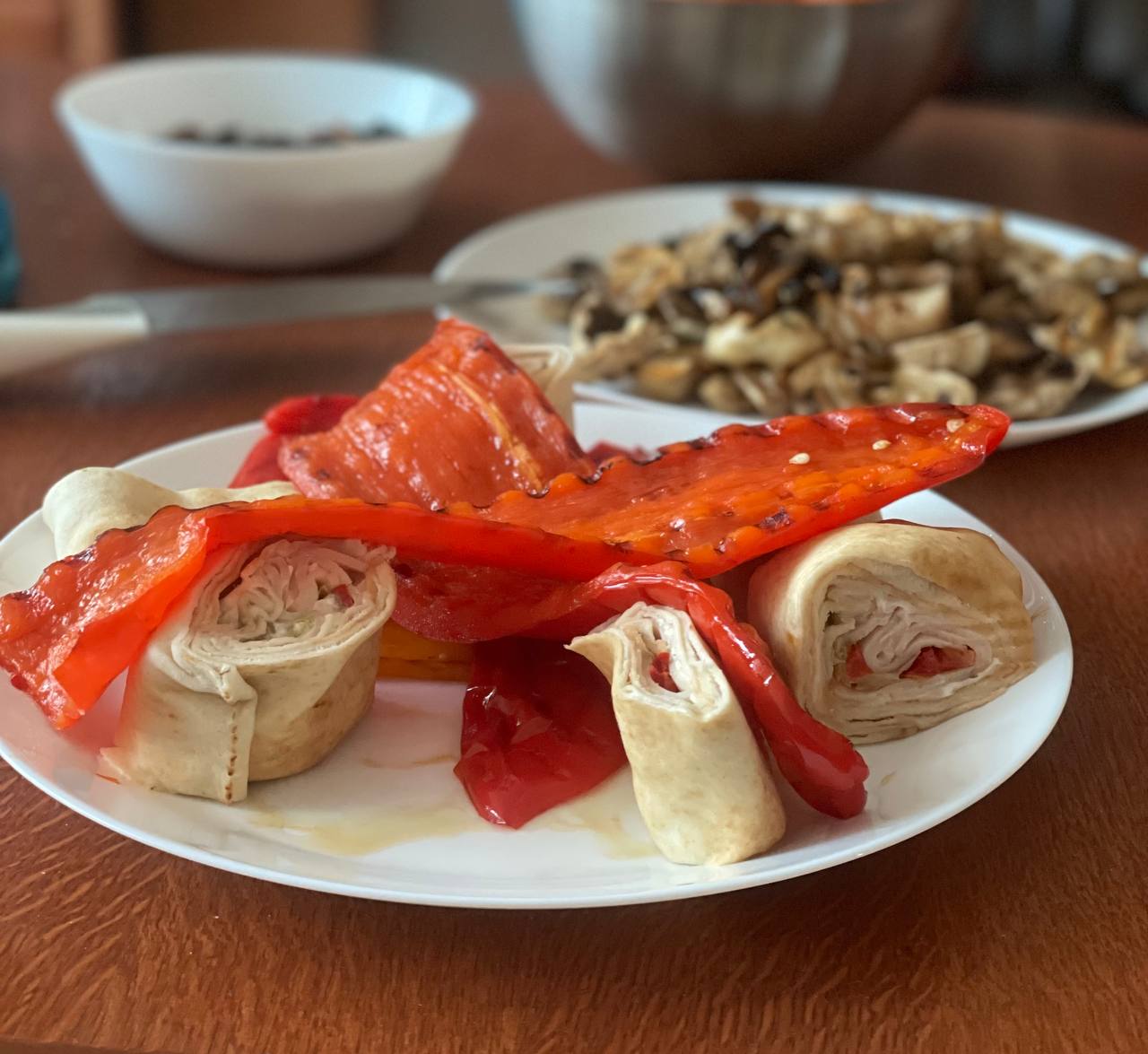 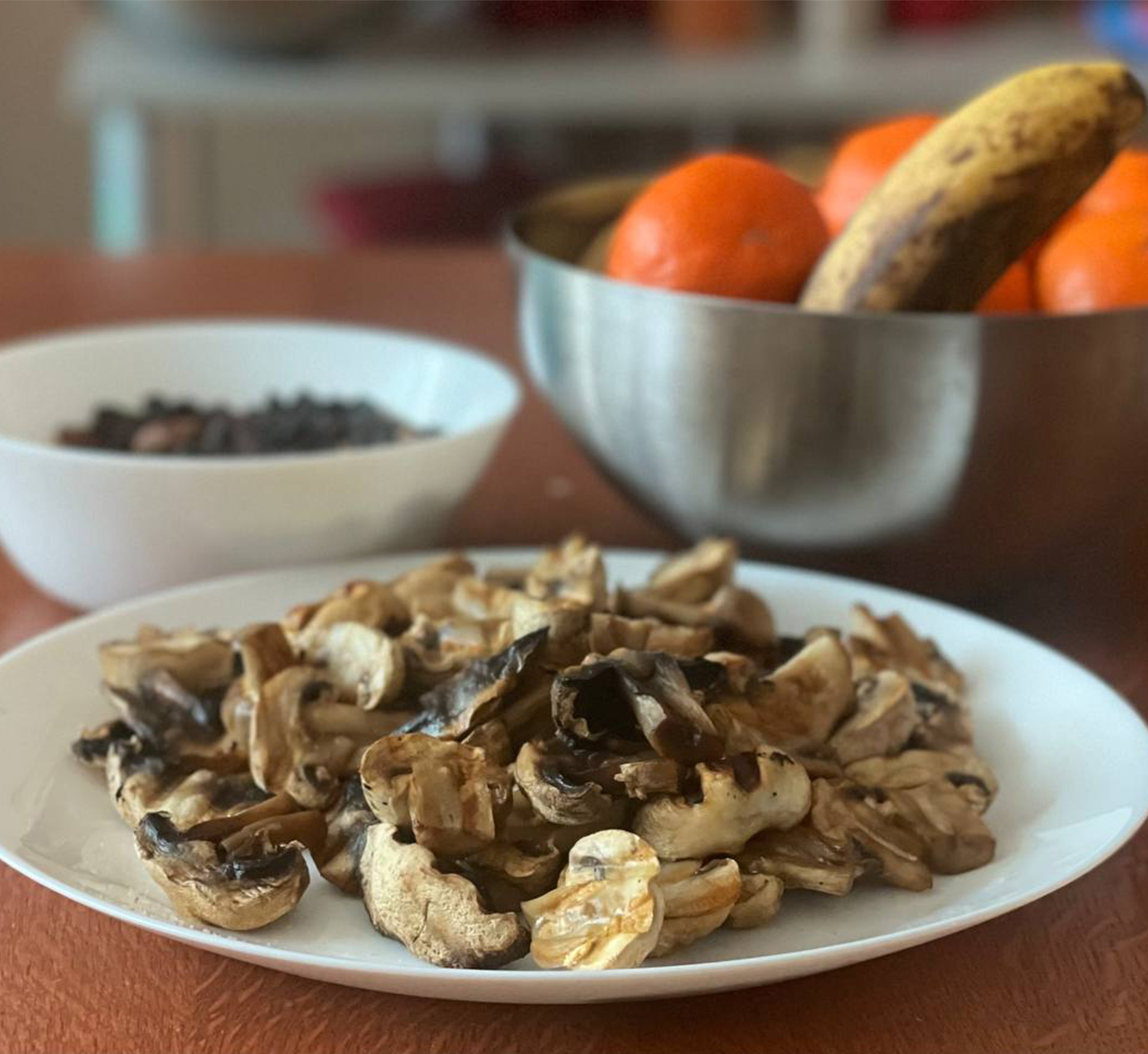 The first place was given to this crocodile alien made of peppers and some pancakes. We were not able to taste the winner dish ourselves, but the jury saw a trick that the cook did in order to win – the one chose colors that are close to every Belarusian, namely white and red. For moral support of the dish, in the background we can see a plate of fried mushrooms which also came to us and then to the one’s table from Maisto bankas! It’s definitely a bingo!  As a result, a convincing victory!

But don’t be dismayed: the next dish looks just as good and in terms of taste it may even surpass the leader. We have a salad of greens in front of us. A healthy lifestyle is the motto of Our Home, which is especially relevant in the light of the past holidays. 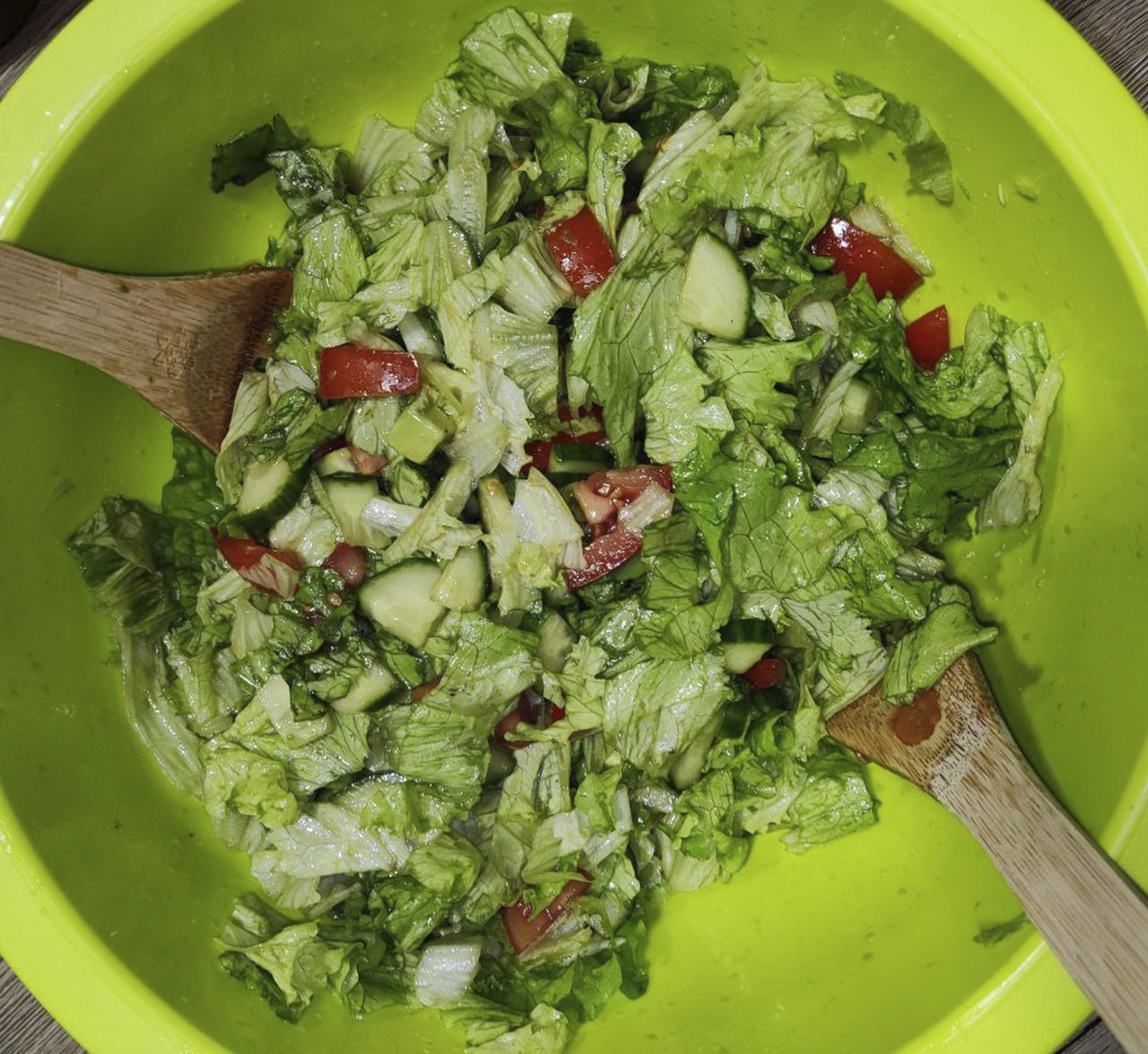 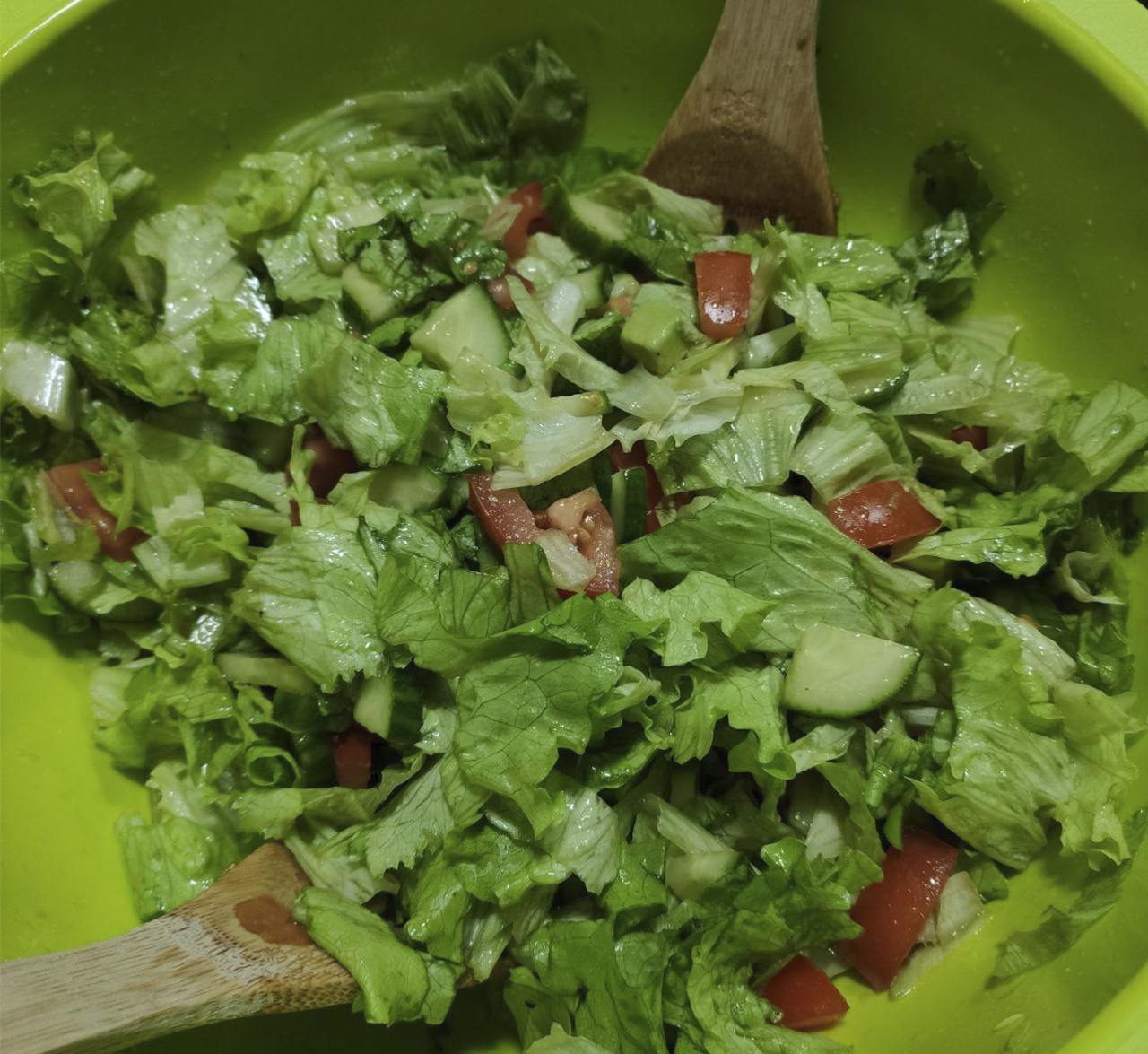 See how deliciously small pieces of tomato drown in the overall sea of greens, creating a unique collage of flavor and smell, like on the paintings of ‘small Dutchmen’. Take a look at these two delightful wooden spatulas-spoons, carefully arranged to represent 8 o’clock on an improvised dial plate!

The third place in our contest is fairly taken by the ‘fur coat’. 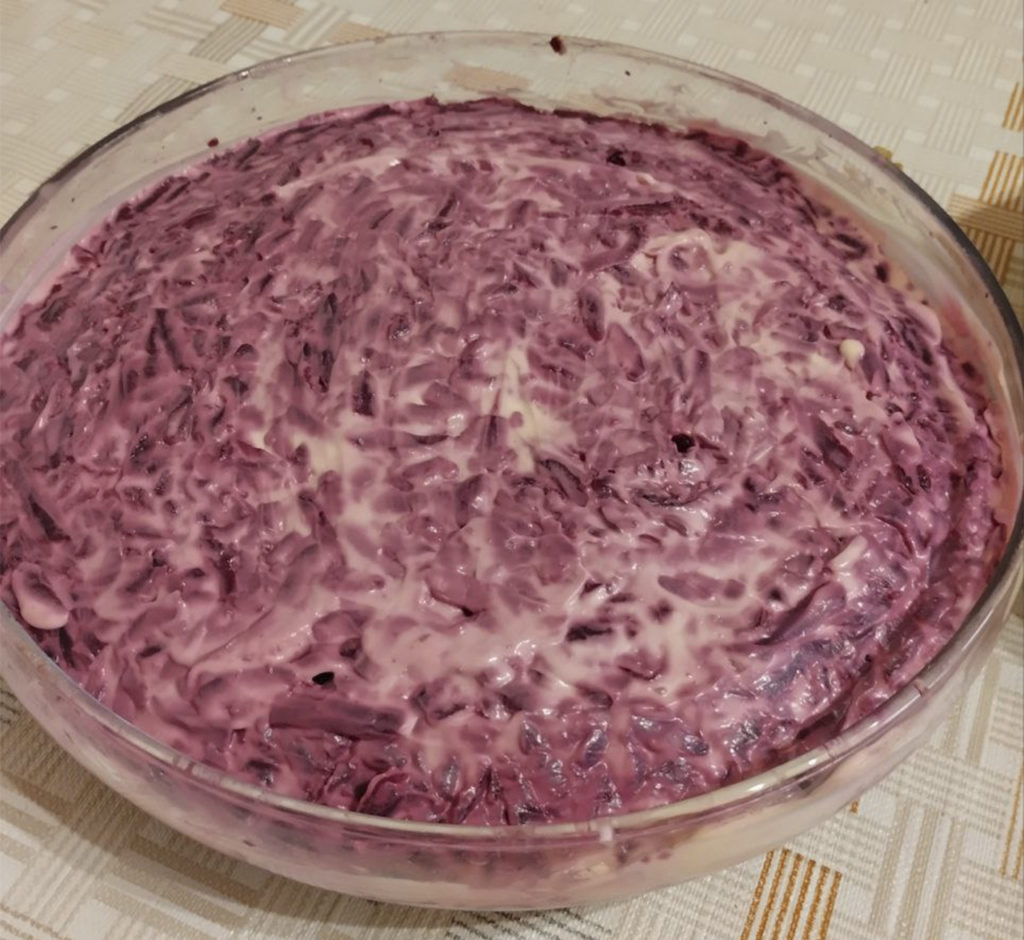 The New Year as a holiday has not yet died down for the Belarusians because we often celebrate it twice (namely New Year and Old New Year).  So, for many of us, a ‘fur coat’ is a constant attribute of these doubled-up celebrations. In this dish, the red, surely beetroot flecks in the white, obviously garlic mayonnaise (I know, because I was the one who loaded those packets of garlic sauce on the Maisto bankas ramp) just scream ‘Leave us for January 13! Don’t eat such beauty now!’

I’m not sure if there’s a herring under that ‘fur coat’, perhaps it accidentally went to another cook, but the ‘fur coat’ itself looks both expensive and rich, as any ‘fur coat’ should.

Looking forward to next Thursday or the next dishes!